Seven Officials Under Investigation After Another Fatal Fire in Beijing 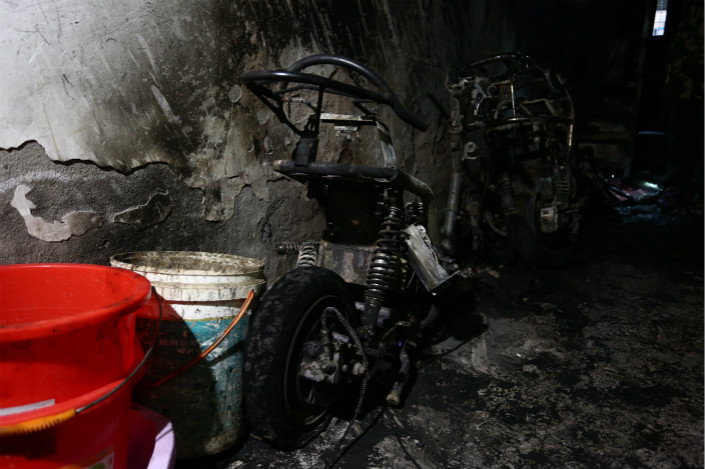 Investigators suspect a short circuit in an electric bike connected to a charger may have caused the fire in Beijing on Wednesday that killed five people. Photo: Visual China

The Communist Party’s disciplinary watchdog said it was investigating seven officials for possible dereliction of duty after a fatal fire in Beijing’s Chaoyang district on Wednesday killed five people and injured nine others.

Those being scrutinized include deputy chiefs of a local township and a police station.

The blaze occurred just past 1 a.m. at a farmhouse in the town of Shibalidian, where more than 30 families — mostly migrant workers — were living in crammed conditions. The fire occurred within weeks of the deadly fire in Daxing district that killed 19 and prompted a citywide crackdown on illicit and unsafe buildings.

Investigators suspect a short circuit in an electric bike connected to a charger may have caused the fire. Police said in a notice released Wednesday night that the landlord has been detained for “allegedly flouting government rules on fire prevention.”

Authorities have yet to release the names of the five people who died. Eight of the nine injured have been admitted to the intensive care unit at Chaoyang Emergency Medical Center, Caixin has learned.

One tenant with an injured left eye who suffered burns to his left cheek said he was taken to a local police station for questioning several hours after the fire. The injured man, who only offered his surname, Zhang, said he was in the police station from about 4 a.m. and wasn’t allowed to seek treatment until 11 a.m.

The charging unit for electric bikes, which is suspected to have caused the fire, was installed by the landlord, according to Zhang. He had arrived in Beijing last month and was staying with a friend living in the building.

The farmhouse was marked for demolition in 2014, but is among the more than 40 buildings left standing amid a dispute over compensation, said a local, who wished to remain anonymous.

A Caixin reporter visited another farmhouse just 200 meters away from the scene of the fire. Some 20 families — again mostly migrants — were living cheek by jowl in the two-story building. Electric wires were seen entangled with laundry ropes along corridors stuffed with makeshift kitchens, closets and shoe boxes.