China TV Sales on the Fritz 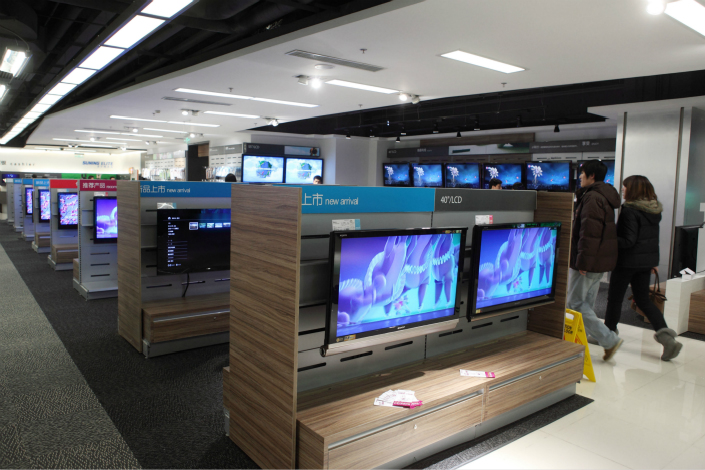 Sales of television sets in China have fallen to their lowest level in five years, while manufacturers’ profits have also plummeted, a senior Ministry of Industry and Information Technology (MIIT) official said at an industry conference.

In the first three quarters of 2017, TV sales fell 12.9% and profits across the industry were down 20.7%, Gao Sumei, a deputy bureau director at the MIIT, said at the 13th China International Display Conference on Monday.

The newly released figures come after a year of sluggish sales in the TV industry. In the first half of 2017, 22.51 million units were shipped by TV-makers in China, down 10.8% from the previous year, according to data from the China Electronic Chamber of Commerce (CECC).

This industry downturn is reflected in the third-quarter earnings of listed TV-makers. Shanghai-listed Hisense Electric Co. Ltd.’s profit for the first three quarters of the year fell 47.39% from the same period last year, while Sichuan Changhong Electric Co. Ltd., also listed in Shanghai, reported a 67.97% drop in its profit.

Traditional TV manufacturers like Hisense and Changhong have faced an increased disruption generated by internet firms in recent years. But internet-TV firms, a category that includes the companies LeEco and Xiaomi Inc., are also facing challenges, according to Lu Renbo, deputy secretary-general of the CECC. Some internet brands are experiencing a trust crisis, with users becoming more cautious when making purchases, creating a vicious cycle that causes their market share to shrink.

LeEco, once a rising internet-TV star, has experienced an especially dramatic meltdown over the past year, after the company’s cash shortage came to light in late 2016.

Faced with increased pressure on their profits, businesses are adjusting their strategies, especially by focusing on more promising products. According to Liu Junguang, vice president of Samsung’s Greater China division, the market share of TV sets larger than 55 inches reached 42.7% in 2017, and this is projected to rise in 2018. Increasing the production of larger TVs could enhance the industry’s profitability, said Chen Wei, director of home display products at Sony China.