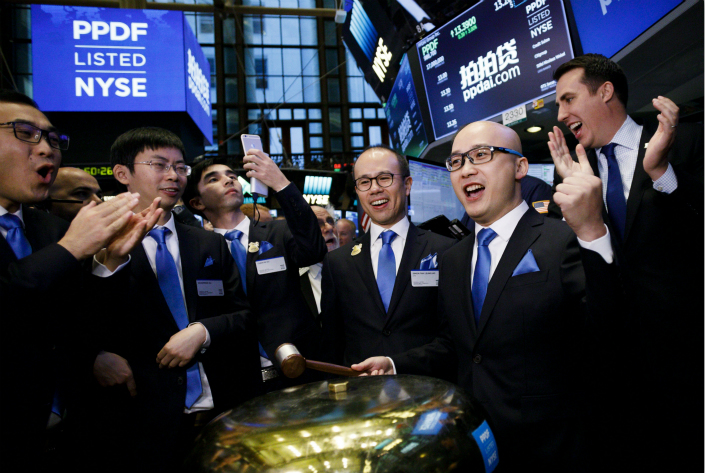 Despite the immediate advantages of listing overseas for Chinese companies such as peer-to-peer lender Ppdai Inc., which had its initial public offering in New York on Nov. 10, some have come to learn that the costs of maintaining an offshore listing are often higher than they might at first seem. Photo: IC

Qudian Inc., unprofitable until the first quarter last year and therefore facing limited listing options, floated its shares in New York instead of China in October.

Chinese companies without a strong track record of profits like the microlender, or ones with two tiers of shareholders who enjoy unequal voting power such as Alibaba have been for years tapping overseas capital markets. Listing overseas held significant allure for Chinese companies that fell short of the minimum listing requirements at home due to the bull markets in the U.S. and Hong Kong, as well as fewer significantly less red tape for initial public offerings (IPOs).

However, listing abroad is not without a downside. While Chinese companies might have found it easier to list offshore, or even raise more money from overseas investors, they were also subject to greater investor scrutiny or even attacks from short-sellers after their debuts. The cost of maintaining an offshore listing is often higher than it seems.

The bull runs in U.S. and Hong Kong stocks this year has been a key incentive driving Chinese companies to list in these markets, analysts said.

The S&P 500 Index was up 19.7% for this year as of Wednesday. The Dow Jones Industrial Average and the Nasdaq Composite Index have risen 25.1% and 29.3%, respectively, over the period Hong Kong’s Hang Seng index has jumped more than 33% this year, breaking through the 30,000-point mark for the first time in a decade. In comparison, the mainland benchmark Shanghai Composite Index only had risen 6.3% in 2017 through Wednesday.

Many of the Chinese companies that went for offshore listings this year were in high value-added, technology-intensive sectors such as internet financial services, e-commerce, education and biopharmaceutical manufacturing.

Their share offerings were well-received by investors and in some markets turned out to be even more popular than IPO champions in previous years. For example, the oversubscription of the stock of China Literature, the country’s largest online publishing firm owned by internet giant Tencent Holdings Ltd., in Hong Kong this year was more than double that of Huatai Securities, which staged one of the hottest IPOs in the city in 2015.

Investors’ confidence in firms from the country was bolstered by strong price gains of existing Chinese stocks on overseas boards this year. Tencent’s shares have soared more than 109% in Hong Kong this year and e-commerce behemoth Alibaba Group Holding Ltd. has jumped 96.91% in New York.

“The outstanding performance of the share prices of large Chinese companies in the secondary markets in Hong Kong and the U.S. have significantly boosted investors’ confidence,” said Brian Gu, chairman of Asia Pacific Investment Banking at JPMorgan Chase & Co.

A more fundamental reason that Chinese firms have sought to list offshore is that many of them wanted to bypass regulatory restrictions in the domestic market, analysts said.

“Many companies opted for U.S. listings mainly because it was impossible for them to go public on the A-share market,” said Wang Ran, president of China eCapital Corp., a homegrown investment boutique. “The U.S. market has opened a window of opportunity that they can’t miss — they simply did not have many other options.”

In some cases, Chinese regulators have stricter requirements than regulators in the U.S. and Hong Kong when they vet IPO applications. For example, China’s rules require companies to have been profitable for the three consecutive years leading up to the IPO application. The rules bar many fast-growing, but money-losing startups from entering the market.

About a quarter of the Chinese companies that listed in the U.S. this year are microlenders and online consumer-loan providers. None would have been able to meet Chinese standards for listing. Qudian Inc., which offers short-term, unsecured loans to borrowers, was only founded in April 2014. The four other online loan providers, such as peer-to-peer lender Ppdai Inc., all suffered losses in at least one of the last three years. Some of the companies are still losing money.

Dual-class shares are not allowed in China’s stock exchanges, which is another factor driving listings to the U.S. The share ownership structure gives more weight to the votes of a small group of shareholders than other stock owners and is widely used by internet companies to allow their founders and senior managers to retain control of the companies after they go public.

Last week, Hong Kong Exchanges & Clearing Ltd. unveiled a draft plan that permits companies in emerging and innovative sectors to have dual-class listings on the city’s stock exchange, in an apparent move aimed at denting New York’s edge with blockbuster IPOs. Alibaba initially wanted to float in the former British colony. But it eventually chose to have its record $25 billion IPO in New York in 2014 after Hong Kong refused to accept the company’s governance structure because it conflicted with Hong Kong’s “one share, one vote” principle.

But there are two sides to every coin. Some companies that cut corners to go public offshore have found themselves facing challenges that they have rarely dealt with in their home country. Furthermore, shifts in Chinese rules could have major repercussions for their share prices.

Chinese companies have often come under more heightened scrutiny in foreign markets, where short-selling is legal and investor protection is more developed.

And when scandals hit, companies are more likely to be taken to court by foreign shareholders than in China, where most stock investors are private players who have limited resources to pursue lawsuits.

Less than two months after its $900 million New York listing, Qudian was sued by investors last week for alleged false information disclosure in its IPO documents. Its shares had slumped 48.2% through Wednesday.

Prior to that, the company released a plan to buy back shares worth up to $100 million from the U.S. market hours after the Chinese government late last month announced stricter policies governing the internet lending industry. Qudian was later forced to triple the value of the share repurchase program as the initial deal failed to stop investors from selling.

Kindergarten chain RYB Education, which fell nearly 40% in a single day after allegations involving abuse of children in one of its kindergartens in Beijing made world headlines, is now targeted by a class action lawsuits filed by two U.S. law firms. The company is trading about 12.9% below the IPO price and has also announced a buyback plan to calm investors.

Rose Zhu, a partner at American law firm Baker McKenzie, said that the U.S. market is tougher than China’s on issues such as information disclosure and employs harsher punishments for scams and infringement on investors’ rights, even if the market appears to be more flexible when approving IPOs.

“In a free market, companies have to handle both the advantages and disadvantages that come along with the freedom,” she said.