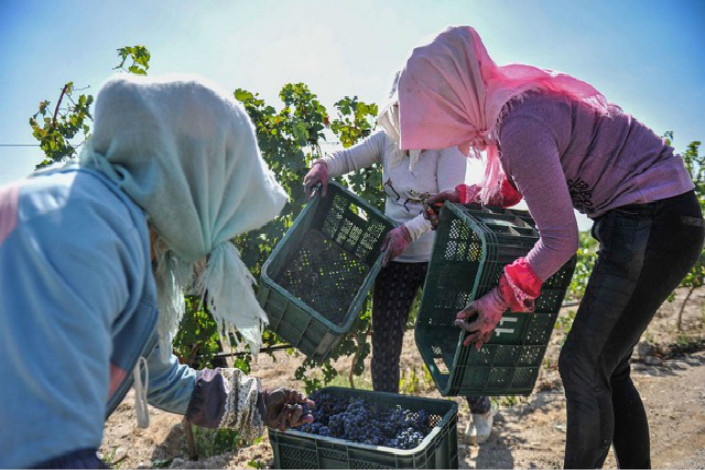 China’s growing upper middle class and affluent population — which McKinsey & Company has projected will grow from 43.5 million people in 2012 to 225 million in 2022 — have shown that they have a taste for the finer things in life.

This group’s demand for high-end products will see them account for a whopping 44% of global luxury sales in the next few years, according to McKinsey.

And one luxury product for which China seems to have an unquenchable thirst is foreign wine. Data released by the China Association of Imports and Export of Wine & Spirits showed that wine imports grew to 407.37 million liters in the first seven months of 2017, an increase of 15.49% over the same period a year earlier. This wine was worth $1.475 billion, 7.65% more than in 2016.

Euromonitor data shows that Chinese people spent an average of 321 yuan ($49) on wine in 2016, up from 255 yuan in 2011. This figure includes all kinds of wine, including rice wines such as Japanese sake and fortified wine.

Chinese businesses have been keen to take a sip of this success, producing a total of 11.37 million hectoliters (a hectoliter is 100 liters) of wine in 2016, according to data cited by wineinfo.com, a Chinese wine industry news portal. This makes China one of the world’s top 10 wine-producing countries by volume.

And along with this production has come international recognition. In 2011, at the Decanter World Wine Awards, Chinese wineries took home several awards, even besting more established wine-growing regions.

While some may have seen this as a groundbreaking moment similar to when Californian wines beat out those of the old world in the Blind Wine test in 1976, Chinese fine wines still face a bottleneck.

Despite their increasingly sophisticated production, the success of Chinese vintners will likely continue to be constrained by production costs and environmental handicaps — both of which make them less competitive compared to their foreign peers.

Chinese winemakers in the 19th century primarily used cabernet sauvignon grapes, and this has widely continued until the present day, with the grape still being the key variety used for wine production in China. However while this grape is easy to grow in large quantities, it is difficult to make top-quality wine with this fruit and it takes a long time to ripen.

According to Edward Ragg, who co-founder with Master of Wine Fongyee Walker (MW) of Dragon Phoenix Wine Consulting, an education firm that has been in the Chinese wine industry for a decade, some of China’s best wine producers are increasingly prepared to experiment with different grape varieties. Some have found that Chardonnay grapes are better suited to certain Chinese areas and climates. Some have also changed wine styles and have moved on to focusing on sparkling wines as the grapes used also tend to be easier to grow and harvest.

However many regions are still not adventurous enough in terms of the varieties they plant, Ragg argues.

When ripe, grapes begin their journey into the bottle.

The process of turning grapes into wine is also becoming more sophisticated at some vineyards. Though China does not have the depth of winemaking culture possessed by France or Italy, Chinese fine wine producers are taking advantage of these countries’ experiences.

A top-shelf example of a company that has incorporated foreign expertise into its winemaking is the Silver Heights Vineyard, which won a commendation at the 2011 Decanter awards in Paris. The Ningxia Hui autonomous region vineyard says it has been heavily influenced by French winemaking.

French winemaking traditions are important to Silver Heights. The daughter of the vineyard’s founder has a degree in French winemaking, and her husband worked at a historic Bordeaux winery for 26 years, explained Alexa Boulton, Silver Heights’ export director. “This background is apparent in not only the structure and taste of our wine, but also in the very methods that we use,” Boulton said.

While these methods — used to remove sediment or otherwise clarify the wine — create products that are of better quality, they also increase the price. Also increasing the price of these vintages are the materials used in the production process.

As wine is fermented, many wineries targeting the luxury market will place the liquid into oak barrels of differing kinds, which allow winemakers looking to produce complex wines to vary the color, flavor, tannin profile and texture of their wines depending on the material’s qualities.

But costs can be high, especially if Chinese wineries follow the tradition of maturing their wines in 100% new oak. A new French oak barrel costs around 800 euros ($948), which is a significant overall cost if the barrel may only be used once for a top wine and then one to two years further for other wines, according to Ragg.

The bottles that end up standing empty on drinkers’ tables also are designed to influence shoppers’ perception of quality. Ragg points out that many brands keen to impress put their wines in “expensive heavy bottles in the hope that people will, rightly or wrongly, associate the packaging with quality. So you see, with a lot of Chinese wines, often made from cabernet sauvignon, that the costs borne by the producer can be higher than in some parts of the world where lighter-weight bottles are more accepted.”

For wineries looking to make a top-notch product, these techniques and production methods are a must, as every Chinese producer must fight against the country’s environment.

China does not have the Mediterranean climate in which wine production is easiest. While the world’s top wine-producing regions like Chile, California’s Napa Valley and Bordeaux have dry summers and mild winters, south China has wet summers and northern regions have harsh winters.

This means that in the south, many vineyards wage a constant battle for the future of their grapes with fungal diseases. A consequence of this is, while there are some exceptions such as LVMH’s Ao Yun vineyard in the lofty mountains of Yunnan Province, most of China’s wine is produced in its drier north and west.

To combat the windy, dry climate of these northern regions, Chinese winemakers have come up with a unique solution. As the temperatures drop, grapes grown in Ningxia, Shanxi, Shandong, Hebei and Xinjiang will be buried underground. The vines are unearthed at the beginning of spring.

Although this allows grapes to come to fruition where they may have otherwise withered, it adds to the cost of maintaining vines, requires workers with special training and a portion of the yield is sacrificed each year.

“If you’re producing wine in a region where you need to bury your vines during winter, even with vine burial occurring, there is still some vine death — anywhere between 5% to 10% in some vineyards in Ningxia, Hebei or Liaoning,” Ragg noted.

Ragg explained that this burial requires skilled workers, which are hard to come by today, and that those who remain — primarily older workers — are asking for relatively high wages.

Massive migration from rural areas to cities has diminished the rural labor pool. According to official data cited by a 2013 report from the International Labor Organization, of the 151 million people who had moved from rural to urban areas in 2010, 58.4% were under 30. Moreover, total rural employment has declined since 2008, the report said.

While China’s far-western region of Xinjiang does have a long tradition of growing grapes, only a small proportion of their grapes go to wine, as there is more money in China in selling dried grapes for eating rather than turning them into wine, Ragg told Caixin.

These difficulties contribute to the fact that China’s greatest wine-producing regions in terms of sales, Shandong and Hebei, generally bring wines of lower quality to market. Stephen Zhang, sommelier at high-end Beijing restaurant Temple Restaurant Beijing (TRB), said: “The wine they produce, I’m quite sorry to say, it’s much more for the financial part. The ones they produce are for quantity, and not really for customer quality. Because the Chinese at that time were not very sure about wines, but they were trying to get different color drinks.”

While more and more Chinese people are becoming sure of their knowledge of wine, many of them are also sure that they prefer foreign products to domestic drinks.

The shelves of Pudao Wines, a wine tasting and retail chain with outlets in Beijing, Shanghai and Hong Kong reflect this preference. The company, which says it is “proud to present a broad and comprehensive selection of 1,000 great wines,” has only 14 Chinese brands on offer in its flagship Beijing store. Store supervisor, Joyce Kong, notes that while the stock is set by the company as a whole, her customers prefer “new world” wines for a better bottle at a lower cost.

Stephen Zhang says that he has noticed this among guests to TRB, explaining that Chinese wine is mostly bought by foreigners. However foreign fans of Chinese wine might find it difficult to get their hands on it in their own country, as little high-quality wine is exported.

Ragg notes that China “doesn’t have the wine making technology experience for producing large volumes of wine for export and its climates gravitate against large volume quality production. Even the premium Chinese wineries cannot compete on a positive quality-price ratio when it comes to exports because there are fine wines from all over the world going to mature markets like the U.K. or parts of the U.S., where there are available typically better wines for better prices.”

Though this may be the case, Boulton from Silver Heights did tell Caixin that the winery is “in the process of launching in several other markets at the moment.”