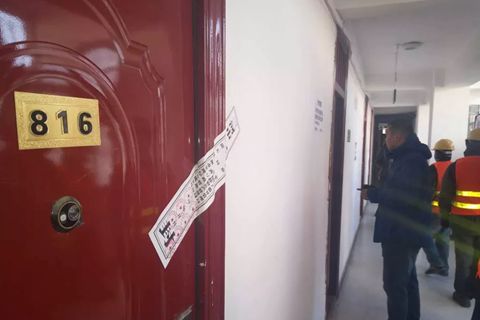 Officials sent to carry out evictions in a village under the administration of Yanjiao town, which neighbors Beijing, told locals that their actions had been modeled on practices adopted by authorities in the Chinese capital following a deadly fire that killed 19. The above picture shows eviction notices posted on apartments in the village. Photo: Sanhe government

A controversial Beijing crackdown on unsafe rental homes that has mostly affected out-of-town workers has spread beyond its borders to a neighboring small town home to thousands of low-income migrants working in the capital.

Officials were shown speaking with a large crowd of villagers in a bid to justify the evictions, saying they were modeled on practices adopted by authorities in the Chinese capital following a deadly fire that killed 19.

The blaze on Nov. 18 in Beijing’s Daxing district occurred in an industrial-residential complex, where mostly out-of-town workers lived. It prompted a string of demolitions as city authorities targeted “illegal and unsafe buildings,” forcing out tenants after two or three days of notice. Thousands were left homeless, or scrambling to find new shelter within days, triggering a massive public outcry.

Several locals in Yanjiao, a town about 30 kilometers (18.6 miles) east of Beijing, have confirmed the authenticity of the videos. The presence of enforcement officials and large crowds of locals in Fengjiafu snarled traffic and caused congestion near the village Wednesday morning, according to villagers. But, there were no reports of violent confrontations, according to a building manager in the village.

Several apartment blocks had been cleared of tenants after landlords who operate rental houses were told to cease operations on Wednesday, said the manager who gave his name as Fang.

Enforcement officials are authorized to cut off power, gas, water and heating supplies to the village to stop landlords from operating such rental houses and force tenants out, according to a government notice issued on December 12.

Yanjiao has long been popular among migrant workers — including office workers — as it offers affordable homes than Beijing. Yanjiao had a population of about 670,000 and more than half are out-of-town workers who were not registered as local residents at the end of 2016, according to the Sanhe city government, which administers the town.

The clampdown targeting rural rental homes in Fengjiafu village is part of a campaign launched by Sanhe to rein in fire-prone buildings in the city, according to a city government document released on December 14.

Enforcement officials have been ordered “to go door to door and leave no stone unturned to identify illicit constructions or buildings offering rooms to tenants without a rental licenses or those that are fire-prone or don’t have proper fire exits,” the city government said.

One shop assistant, who works in Beijing but lives in Yanjiao, said he paid 500 yuan ($76) a month for an apartment in a rental building in the town.

He hasn’t received any eviction order, but he is looking for a new place in a legal apartment block in Yanjiao, which might cost twice as much.

“No one likes to live in a poorly built rental home in rural areas if they have the money, I don’t have other options, do I?” asked the man who asked not to be named.

“I don’t want to end up being homeless for days like those in Beijing.”