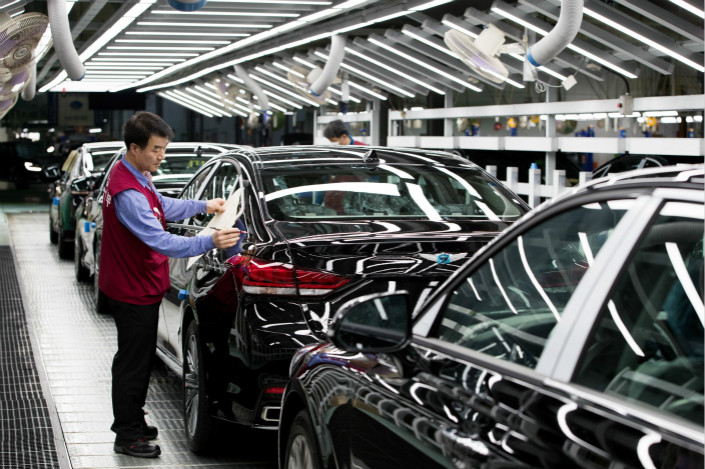 Hyundai Motor Group sales slumped in China last year amid diplomatic tensions between Beijing and Seoul over South Korea's deployment of a U.S. anti-ballistic-missile system. Above, a Hyundai Motor Co. Genesis luxury sedan gets a final inspection on a production line at the company's plant in Ulsan, South Korea, on April 24. Photo: Visual China

Hyundai Motor Co. and affiliate Kia Motors Corp. set their combined target for this year at 7.55 million vehicles after missing their sales goal of 8.25 million cars last year, Hyundai said in a statement on Tuesday.

The firms’ sales slumped in China — the world’s largest car market — last year amid diplomatic tensions between Beijing and Seoul over the latter’s deployment of a U.S. anti-ballistic-missile system.

From January to November, Beijing Hyundai Motor Co. and Dongfeng Yueda Kia Automobile Co. managed to sell 970,000 vehicles combined in China — a 38% drop in sales compared with the same period the year earlier, according to Yonhap.

In October, Seoul and Beijing agreed to put their relationship back on track, easing bilateral political tensions over the installation of the anti-missile defense system.

Analysts said South Korean automakers have weathered the toughest time caused by the political backlash, but their prospects will likely remain difficult in the years ahead as affordable domestic brands increasingly put pressure on their business.

“South Korea brands were hit the hardest among foreign automakers by Beijing’s efforts to upgrade its domestic technological know-how in the industry,” said Wang Cun, an industry analyst with the China Automobile Dealer Association.

Wang added that Hyundai is in an “embarrassing” situation, as its efforts to sell more high-end automobiles have been stymied by fierce competition with Japanese and German automakers that are well-established in this area.

Japanese carmakers experienced a similar political backlash back in 2012 when the country’s nationalization of the Diaoyu Islands sparked a wave of anti-Japanese protests in the country.

Companies like Honda Motor Co. Ltd. have since recovered, as they successfully managed to make strategic shifts, including focusing on the country’s youth, Wang said.

Similarly, Hyundai Motor is also trying to diversify its product lineup, including emphasizing its SUVs and electric models.

“The company plans to launch electric models by 2025, but by then it could be too late as domestic and other foreign electric-vehicle-makers will already have started mass production,” Wang said.