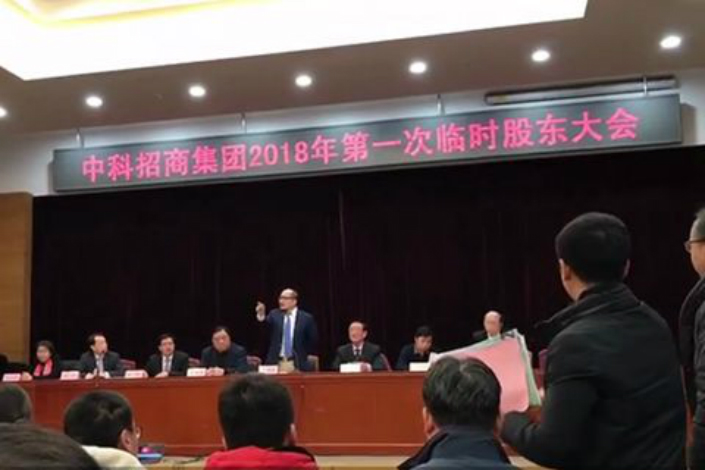 At a tense shareholder meeting on Tuesday, investors repeatedly interrupted a speech by company President Shan Xiangshuang. Some complained that they bought the company’s stock for 18 yuan a share when it debuted in February 2015, only to see its value plummet. Photo: Liu Caiping/Caixin

A week after China Science and Merchants Investment Management Group (CSC Group) was delisted from the over-the-counter (OTC) market, the standoff between the private equity firm and its shareholders remained unresolved.

During a meeting with shareholders on Tuesday in Beijing, investors were asking CSC Group to buy back shares at the prices they paid. Some even demanded additional compensation equivalent to a 10% annualized return.

Peng Wei, secretary of CSC Group’s board of directors, refused to commit to a buyback, saying the proposal lacks a legal foundation, Caixin has learned.

CSC Group, once the most valuable Chinese private equity firm traded off-exchange, with a market capitalization of 13 billion yuan ($1.96 billion), was officially removed from the OTC market on Dec. 26. By then, its value had fallen by half.

The operator, National Equities Exchange and Quotations (NEEQ), said earlier that the forced removal was due to the fact that less than half of the company’s revenue came from service fees and business income, far below the minimum 80% required to stay listed.

Prior to the delisting, CSC Group was also questioned by the operator about its massive, 12 billion-yuan private share placement, as well as its purchase of stakes of as many as 16 companies at one point.

Market watchers argued that the share buyback proposal is not feasible because it would work against regulators, which have been discouraging the so-called implicit guarantee that would have covered investors’ losses.

However, some lawyers have argued to the contrary, saying OTC market rules state that companies have the obligation to compensate investors for their losses, and in some cases, companies could form a compensation fund with their listing underwriters.

Everbright Securities Co., CSC Group’s main underwriter, has not created a plan to set up a joint compensation fund with the company, Caixin has learned.

At Tuesday’s tense shareholder meeting, some investors repeatedly interrupted a speech by company President Shan Xiangshuang. Some complained that they bought CSC’s stock for 18 yuan a share when it debuted in February 2015, only to see its price fall to 0.61 yuan a share just before the company was delisted. Some said that Shan had said the stock’s price would jump to 90 yuan a share by 2016, which did not happen.

CSC Group was one of the five private equity firms that NEEQ has forced to delist under a new round of market rectification since last October.

CMC Group’s annual profit plummeted 99% to 12.2 million yuan in 2016 from a year earlier, according to the company’s annual report, which blamed the decline on huge losses from stock investment.