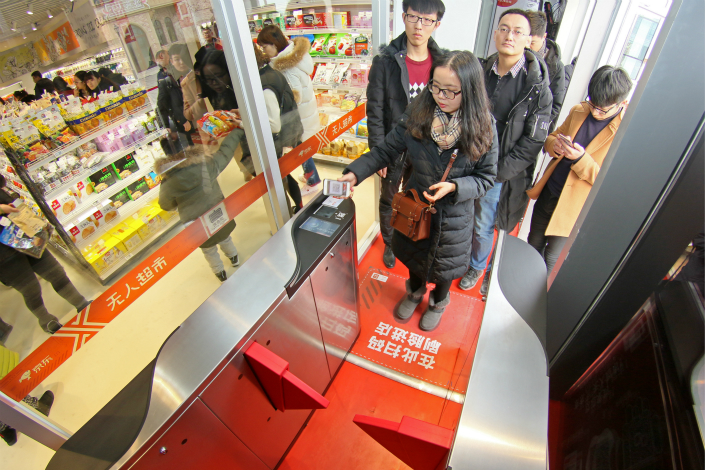 Online retailer JD.com Inc. has launched an unmanned supermarket for general public use, besting rivals Amazon.com and Alibaba in the race to roll out the first such fully automated store for commercial use.

The JD.com store, in the coastal city of Yantai in Shandong province, opened over the weekend, with a target of turning a profit within six months, according to China’s second-largest e-commerce company.

Similar to other cashier-less stores, it allows customers to walk in, pick up items and pay for them using smartphones without waiting in line. JD.com has been running a beta version of the store for employees at its Beijing headquarters since October, but the Yantai opening marks the first commercial version.

Rivals Alibaba Group Holding Ltd. and Amazon.com Inc. both also operate unmanned convenience stores, but only in beta versions not available to the general public.

JD.com said that the Yantai store is equipped with advanced technologies, including facial recognition and cloud computing, which can improve the speed and accuracy of the payment process.

The company is in talks to open additional outlets across the country this year, including in office buildings and other commercial centers and residential areas. Choice of goods will be localized based on consumption data from JD.com and its partners.

The project comes as the automated store concept has made headlines in recent years, both at home and abroad. Amazon.com made headlines when it unveiled its Amazon Go concept stores in 2016. Chinese e-commerce giant Alibaba followed by launching a pop-up store in July.

But neither has commercialized the concept so far. The Amazon Go store is currently open only to employees at its Seattle headquarters, while Alibaba only showcased its store for five days in its hometown of Hangzhou.