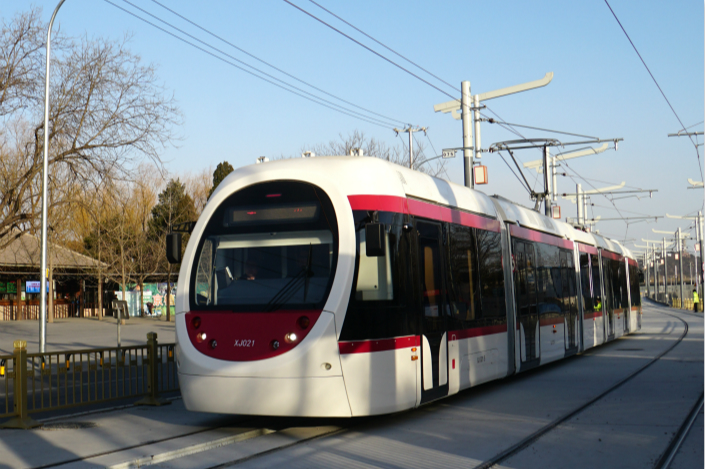 “The new light train XJ003 was running out of track as it was leaving the Fragrant Hills station in the city’s west on Monday afternoon,” Beijing Public Transportation Group said in a statement on Monday night. The accident did not cause any injuries as the train had no passengers and only one driver at the time, the statement added.

At least two of the train’s wheels had left the track, leading the train to tilt to one side, several workers involved in recovering the train told Caixin. The train is now being stored in a warehouse alone the route, and service has halted between Fragrant Hills station and the next stop, the Botanical Garden station.

The 9.3-kilometer (5.8-mile) Xijiao Line, which runs between the city main urban area and a former imperial garden popular with sightseers, was hailed as the capital’s first modern light rail system when it opened on Saturday.

Unlike other Chinese cities such as Shenzhen and Wuhan, Beijing hasn’t had a light rail commuter system since the 1960s, when the municipal government stopped using the electric trains.

Compared with its rivals in this area — such as Siemens, Bombardier and Alstom — Hitachi’s “floor-based” technology is weak, industry experts told Caixin.

Industry executives told Caixin that the company has not established a floor-based light rail line before, and the Xijiao Line may be its “trial route.”

French company Alstom SA, whose Citadis tram system has been applied in more than 50 cities in over 20 countries, went up against CNR Dalian for the Xijiao project in 2011, with the backing of Beijing-based train manufacturer Beijing Subway Rolling Stock Equipment Co. Ltd.

A source from Beijing Subway Rolling Stock Equipment told Caixin that the company signed a memorandum of understanding with Alstom regarding the import of its trains, after getting favorable signals from the Beijing Public Transportation Group.

CNR Dalian’s success was considered a big surprise in the industry, the source said.

A source from CNR Dalian told Caixin that the relatively low price offered could have been why they were chosen by Beijing Public Transportation Group.