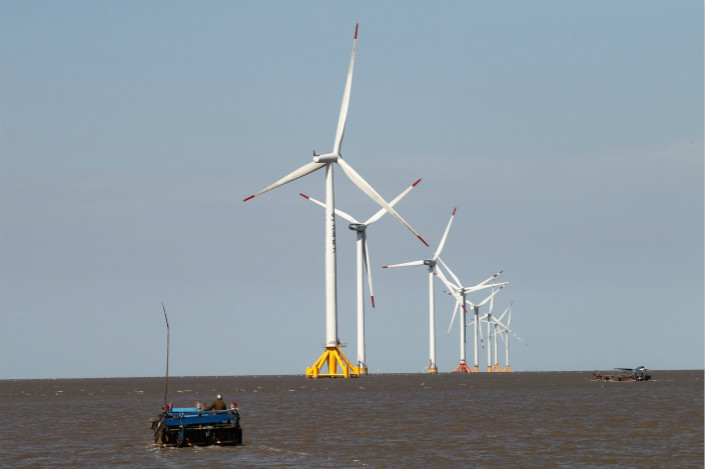 Most of the ecological impact from offshore wind farms is caused during the construction phase, during which sediment near construction sites can lower levels of oxygen, and the disperse substances harmful to marine organisms, a non-governmental enivronmental organization said in a document sent to Caixin. Photo: Visual China

The Guangdong Development and Reform Commission recently called for work to have started or been completed on at least 12 gigawatts of offshore wind power capacity by late 2020 — six times a goal it previously set last year.

Wind farms designed with cables cutting through these zones, which are delineated by the government, include a China Three Gorges Corp. project near Yangxi county, and three projects near the city of Yangjiang run separately by Guangdong Yudean Group Co. Ltd., China General Nuclear Power Group Corp., and the China Energy Conservation and Environmental Protection Group.

Over a quarter of the marine area surrounding Guangdong is classified as red zones by the provincial government, which said in October that it was splitting zones into “forbidden” and “restricted” areas. In forbidden zones, land reclamation and all other activities that may damage the marine ecosystem are prohibited. In restricted zones, only land reclamation is banned.

Some offshore wind power projects will have a serious impact on precious fishery resources, and will damage the environment, CECA said in a document sent to Caixin. CECA’s director of research Zhang Jiawei cited the 2015 death of a Chinese white dolphin near Guangdong’s Zhuhai Guishan Offshore Wind Farm, which is only 2.5 kilometers (1.5 miles) away from the Pearl River Estuary Chinese White Dolphin National Nature Reserve.

Most of the ecological impact from offshore wind farms is caused during the construction phase, according to a paper by Zheng Leifu, a member of a technical research organization affiliated with the China Three Gorges Corp. During construction, sediment concentration increases in the area surrounding the construction site, resulting in lower levels of oxygen, and the dispersal of substances harmful to marine organisms, according to Zheng’s paper.

Caixin contacted the Guangdong Provincial Oceanic Fishery Administration for comment Tuesday, but the administration’s representative said they were still in the process of understanding the situation.