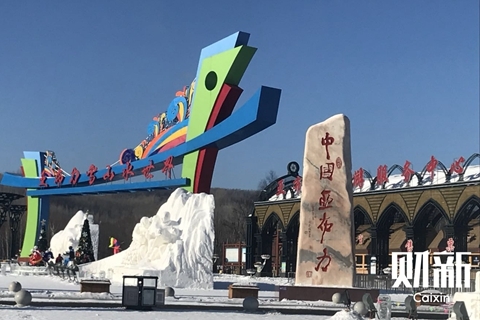 Yabuli ski resort operator Mao Zhenhua accused a local government-backed administration of seizing his company’s land to set up rival facilities. Above: The tourist center at the Yabuli Ski and Tourism Resort in Heilongjiang. Photo: Caixin

Complaints gone viral of a system rigged against private business have set off an avalanche of support – including by the local government – for the operator of a money-losing ski resort in northeast China.

On Thursday, authorities in Heilongjiang province said that an entity it created in 2014 to manage and coordinate business operations locally had improperly seized land from the operator of Yabuli Sun Mountain ski resort to set up its own competing ski venue with hotels and restaurants nearby. The local government ordered the Yabuli Ski and Tourism Administration to apologize and pay businessman Mao Zhenhua for the land.

Mao and supporters interviewed by Caixin accused the administration of bullying tactics, including harassment of employees and unwarranted fines and investigations.

Mao, who bought a controlling share of Sun Mountain in 2010, has been losing about 100 million yuan ($15.3 million) a year on his investment, according to Mao’s friend Wu Yajun, the president of Longfor Properties Co. Mao says his resort’s “dark period” was a slippery slope that began in 2014 – when the administration was set up.

One person close to the matter said the conflict underscores the Yabuli administration’s conflict of interest. The administration is “a government body but also engages in business activities,” the source said.

“Government should serve and supervise businesses, rather than setting up firms to fight with other players for interests in the market,” he said.

In its statement issued Thursday, Heilongjiang province, which investigated Mao’s complaints, said the controversy “reflected administration officials’ lack of awareness of laws and regulations. The administration violated rules in enforcing administrative measures … and failed to fulfill its responsibility to coordinate interests of different resorts (in the area).”

The uproar started on Jan. 1 when a video went viral of Mao, the ski-resort operator, accusing local officials of harassing his ski-resort business in Yabuli. Mao is the president of China Chengxin International Credit Rating Co., one of the country’s first rating agencies.

In the video, Mao, standing in front of a small group of employees at Sun Mountain, accused the government-backed administration of the resort area of illegally appropriating 126,000 square meters (413,300 square feet) of land from his company, as well as using its administrative powers to intervene in business operations and even threaten his employees.

“Despite being a legally operated business, we have often been threatened with various inspections. One day it’s the police. The next day it’s the food safety enforcement officers. And then inspectors in charge of boiler safety,” Mao said.

Formerly known as Windmill resort, Sun Mountain was one of the earliest ski resorts in Yabuli and boasts of having its highest slopes.

Mao’s attempts to turn around the ski resort were undermined by the Yabuli resort administration, he said.

Mao claimed in the video that the administration started to seize Sun Mountain’s land in 2014 to set up a rival ski resort and other business facilities.

FIA – the resort administration’s supervisor – is the owner of China Longjiang Forest Industry Group, which was set up in 2014 with business ranging from tourism, finance, food, timber and media. One of Longjiang Forest’s subsidiaries – Yabuli Yaxue Tourism Group – is a ski resort and travel agency operator registered with the same address as the administration’s office.

A source close to Sun Mountain said the government’s order made no difference and that the administration continued building on Sun Mountain’s land. In late 2017, Sun Mountain set up a fence and sent guards to stop construction on the land, further enflaming tensions.

Since then, Sun Mountain has been fined repeatedly for such things as overloaded vehicles and flaws in its fire control system. The company’s business operations have been interrupted by bogus police investigations, said the source.

On Dec. 13, more than 10 employees of Sun Mountain were summoned by police for allegedly “damaging ski tracks.” When Mao visited the resort during the New Year holiday, he grew annoyed, feeling his employees were being bullied, said another source close to Sun Mountain.

In October 2017, the administration asked Sun Mountain to share its hotel revenue with the alliance, said the source, but the resort declined.

According to the Heilongjiang government, the Yabuli resort area received 1.2 million tourists in 2017, with revenue totaling 642 million yuan—a 16-fold increase from 2013. But Sun Mountain is still operating at a loss.

“The punishment (of the administration) is too light and lacks sincerity,” wrote one user on Weibo, a twitter-like service.

Others on social media see the controversy as representing a larger problem of why three rust-belt provinces — Heilongjiang, Jilin and Liaoning —have been burdened by growing debt and low growth for decades. Referring to the gateway at the Great Wall to those provinces, Shanhaiguan, one person said in a chat discussion that Sun Mountain’s experience “proves the saying that ‘people should refrain from investing their money beyond Shanhaiguan.’”