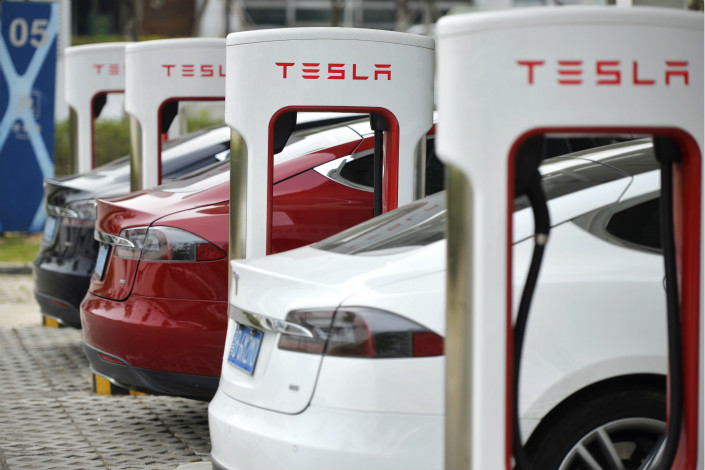 Tesla Inc. said it has set up a total of 168 charging stations in the country, which combined have over 1,000 chargers for the drivers of its vehicles. Photo: Visual China

Tesla Inc. announced on Thursday that it had set up over 1,000 electric car chargers in China by the end of last year, and that it aims to introduce another 1,000 this year.

“Our five new ‘Supercharger stations,’ including three in Beijing, began operations early this week,” Tesla’s China branch said in a statement posted to Weibo, a Chinese social media platform similar to Twitter. One of the other two stations is in Shanghai and the other is in Jiaxing, Zhejiang province.

Tesla said it has set up a total of 168 charging stations in the country, which combined have over 1,000 chargers for the drivers of its vehicles. The company did not announce the exact number of chargers.

Tesla’s push to grow its car-charging infrastructure shows the importance to the company of the Chinese market — its biggest after the U.S.

Tesla is currently in discussions with the Shanghai government about building a production facility in the city’s free trade zone, the Ministry of Commerce confirmed in October, amid reports that the U.S. electric car-maker will set up a wholly owned factory in China to escape the heavy tariff that is imposed on foreign automakers.

Additionally, the company recently set up a research and development (R&D) center in Beijing, whose business will include the transfer of R&D achievements, technological services and consulting, according to Tesla.

Tesla’s moves come at a time when dozens of other domestic electric car startups — including Nio and WM Motor Technology Co. Ltd. — are rushing into this policy-driven sector, which has seen rapid development spurred on by years of generous central and local government subsidies.

Last month, Nio unveiled its first model, the ES8, which it plans to offer to customers in 2018 at half the price of Tesla’s Model X.

China is the world’s largest electric car market, with more than 500,000 units sold in 2016. But industry experts have said that the underdeveloped charging infrastructure will pose a challenge to the sector’s further growth.

The Ministry of Industry and Information Technology estimates that the country will have 5 million electric cars by 2020, which will in turn require 4.8 million chargers. But there were only about 199,000 across the country as of November, according to China’s National Energy Administration.

Even the facilities that do already exist are often underused. “Most chargers have a very low usage rate — an average of 15% — which partly explains why investors are not very interested in the area,” said Xu Yanhua, chairman of the Charging Infrastructure Alliance, a government think tank.

The “usage rate” of a charger refers to how long it is used in a 24-hour period.