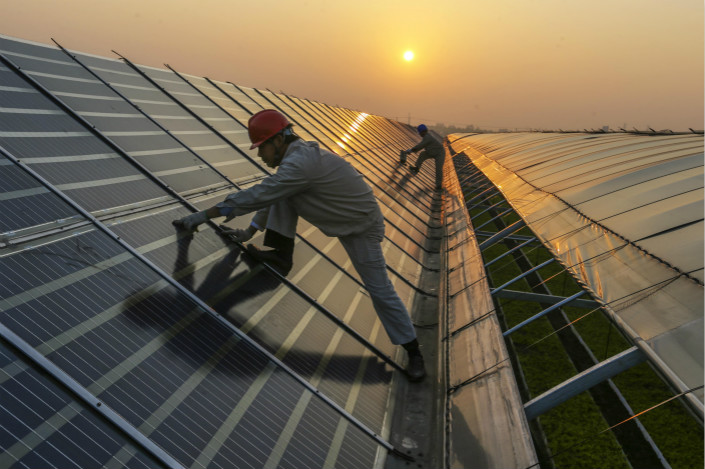 China is likely to have significantly raised its installed solar power capacity in 2017, thanks to the increased use of efficient technology and the popularization of distributed power generation, according to a prominent academic.

Chairman of the China Renewable Energy Society, Shi Dinghuan, said Monday that, “barring any surprises,” China likely installed more than 50 gigawatts of new solar capacity in 2017. This marks an enormous increase from China’s new installation of nearly 35 gigawatts in 2016. Shi was speaking at the annual China Photovoltaic Industry Conference, held in Suzhou, a city just west of Shanghai.

China’s National Bureau of Statistics (NBS) has already calculated that newly added installed solar capacity in the January-November period was 48.4 gigawatts, but has not yet released an official figure for the entire year.

In addition to the large increase in capacity, China’s solar power plants also passed a milestone in energy generation over the past year, Shi said. They generated more than 100 billion kilowatt-hours for the first time in 2017. According to NBS figures, solar power generation from January to November 2017 reached 106.9 billion kilowatt-hours, up 72% year-on-year. However, solar power still accounts for only 1.86% of the total power generated in China.

The recent increase in solar power capacity and production is mostly due to newer technology, such as high-efficiency monocrystalline panels, Shi said. Additionally, distributed solar power generators, as opposed to traditional large solar farms, are boosting the sector’s size.

China’s central government plans to implement a pilot distributed-power trading program across the country to further encourage the use of solar and wind power, and to push companies to generate more power with their existing capacities.

But the plan has faced setbacks, including a lack of coordination between regional and central governments.

Shi cautioned Monday that the growth of distributed power generation could face quality problems, due in part to poor standardization.