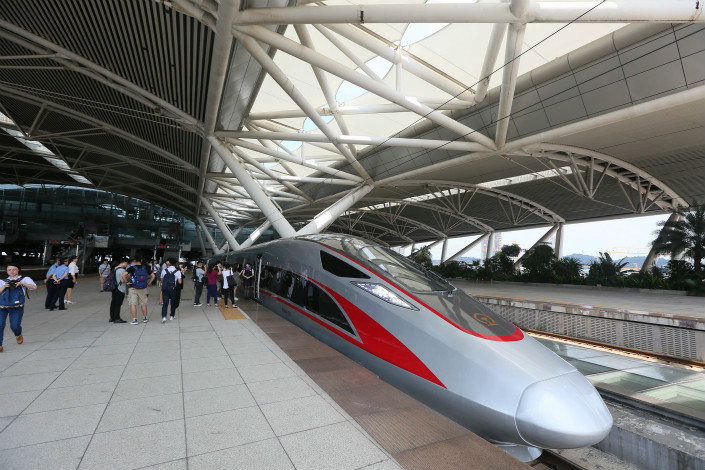 A one-way trip from Hong Kong to the Shenzhen Futian Railway Station will cost HK$80 ($10.23), despite a 2009 estimate that a ticket to Shenzhen on the the Guangzhou-Shenzhen-Hong Kong Express Rail Link would cost HK$45 to HK$48. Photo: Visual China

Frank Chan, Hong Kong’s secretary for transport and housing, said that a one-way trip from Hong Kong to the Shenzhen Futian Railway Station will cost HK$80 ($10.23), while trips to Shenzhen North, Dongguan, and Guangzhou will cost HK$90, HK$210, and HK$260 respectively. Chan provided the prices to reporters after a meeting with China Railway officials in Beijing on Monday.

Hong Kong’s Transport and Housing Bureau estimated in 2009 that the prices would be HK$45 to HK$48 for a ticket to Shenzhen, and HK$180 for a trip to Guangzhou. A regular express-train journey from Hong Kong’s Hung Hom station, in the southern Kowloon Peninsula, to Guangzhou costs HK$210.

The 140-kilometer (87-mile) Express Rail Link, which the Hong Kong government says will “reinforce Hong Kong as the southern gateway of the mainland,” is expected to cut traveling time between central Hong Kong and its nearest mainland neighbor, Shenzhen, to 14 minutes. It currently takes at least 50 minutes to travel from Hong Kong’s Austin Station, near the site of the future West Kowloon high-speed rail terminus, to the Shenzhen Futian border checkpoint.

Hong Kong’s government expects the rail link to be complete by the third quarter of 2018. Up to 114 high-speed trains are expected to leave Hong Kong for the mainland each day during the peak season, Chan said on Monday.

Part of a broader push to integrate the Pearl River Delta Region, the rail link will also see mainland law enforcement officials stationed in central Hong Kong for the first time, under the “co-location” plan to combine Hong Kong and mainland checkpoints at West Kowloon station.

The area in the station occupied by mainland immigration officials will be subject to mainland laws, according to a document published in December by the National People’s Congress, China’s parliament. Hong Kong Chief Executive Carrie Lam and mainland officials say the co-location system will make cross-border journeys more convenient for passengers, who won’t have to disembark the train at the border, which they are currently required to do.

Hong Kong signed an agreement to participate in the Guangdong-Hong Kong-Macau “Greater Bay Area” development plan in July, on the 20th anniversary of the former British colony’s return to China. An immense bridge linking Hong Kong and Macau with Zhuhai in Guangdong province is currently under construction, and is expected to open in 2018 after years of budget overruns and delays.