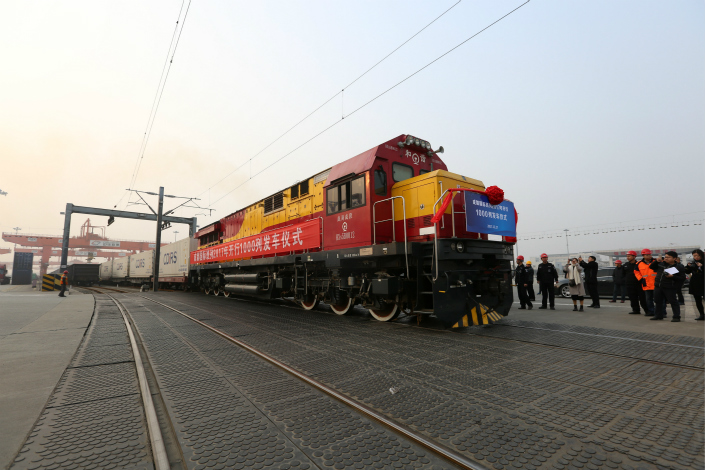 Launched by President Xi Jinping in 2013 as a way to build China’s global business ties, the Belt and Road development strategy has resulted in infrastructure, trade, and investment deals with dozens of countries and foreign organizations. Photo: Visual China

Zhang Xiaoqiang, vice chairman of the China Center for International Economic Exchanges, was quoted by China Daily as saying that the move is aimed at expanding Hong Kong’s participation in the Belt and Road through “facilitating the initiative on the investment front and further promoting internationalization of the yuan.”

Additionally, the plan could boost Hong Kong’s role in offshore yuan trading, the report said. Zhang did not offer a timeline.

Launched by President Xi Jinping in 2013 as a way to build China’s global business ties, the Belt and Road development strategy has resulted in infrastructure, trade, and investment deals with dozens of countries and foreign organizations.

The agreement called for Hong Kong to use its status as a financial hub to raise funds for the initiative.

If China follows through with the plan described by Zhang, Hong Kong could see its first major yuan-denominated IPOs since 2011, when Hui Xian Real Estate Investment Trust, controlled by Hong Kong tycoon Li Ka-shing, raised 10.48 billion yuan (about $1.6 billion at the time) in the first such offering ever.

China has for years been promoting the yuan’s international use. The country launched two Stock Connect programs — linking the Hong Kong Stock Exchange with those in Shanghai and Shenzhen — in 2014 and 2016 respectively. In October 2016, the International Monetary Fund added the currency to its Special Drawing Rights basket, the organization’s supplementary reserves.

Guangdong province, Hong Kong, and Macau have also been discussing a possible program to loosen restrictions on the flow of yuan between the mainland and the two special administrative regions.