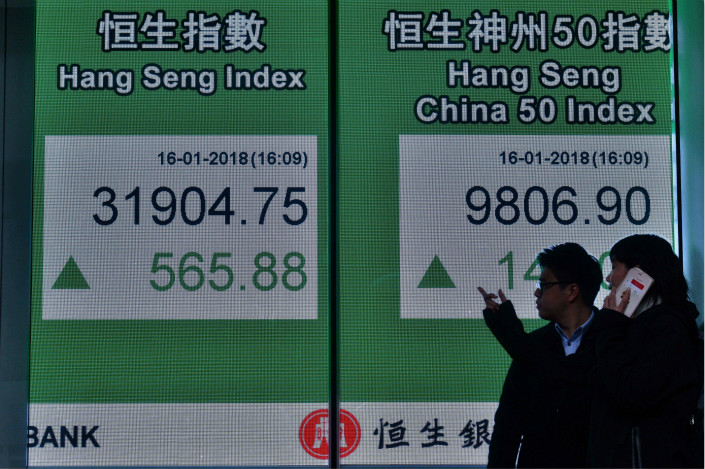 The index’s 0.43% gain put it at 32,121.94 by the end of Thursday, marking the 17th gain in the last 18 sessions. Leading bank ICBC led the blue chips with a 3.2% gain, while wireless giants China Mobile and China Unicom both also rose nearly 3%. The Hang Seng China Enterprises Index, which tracks yuan-denominated H-shares, closed up 1.76%.

“The Hang Seng Index will continue to set new records, and the trend will not change,” BOCOM International head of research and strategy Hong Hao told Caixin.

He said the spread between interest rates that banks charge to borrowers and the ones they give to depositors is expanding, which should help to boost their profits.

Flows of capital into Hong Kong through the Shanghai and Shenzhen stock connects have been growing rapidly. In 2017, the average daily value of Chinese mainland investors’ trading in Hong Kong-listed stocks was HK$9.71 billion ($1.24 billion), more than double 2016’s HK$414 billion, according to figures published by the Hong Kong stock exchange.

Hong added that at current levels, Hong Kong stocks now trade at price-to-earnings (PE) ratios of about 19, which is still less than ratios of more than 20 times for major global markets.

Even though Hong Kong stock valuations are at historic highs, the levels are reasonable considering the strong profit growth at Chinese enterprises, said Victoria Mio, China chief investment officer at Robeco Group. Hong Kong had one of the best-performing stock markets in the world in 2017, with the Hang Seng Index rising 36%.