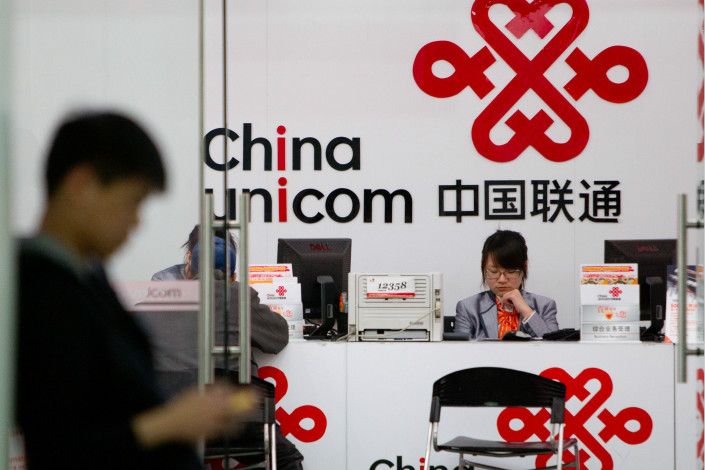 China Unicom will offer options for the company’s Shanghai-listed stock to midlevel and senior managers, as well as key sales and technology staff. Photo: Visual China

State-owned wireless carrier China Unicom has decided which employees will get stock options under its mixed-ownership reform program, prompting both excitement and worry among those selected, company sources told Caixin.

The middle of China’s three major carriers will offer options for the company’s Shanghai-listed stock to midlevel and senior managers, as well as key sales and technology staff, Caixin learned. Some better-performing divisions of the company will offer options to as many as 300 employees, the sources said.

Unicom published details of its equity incentive plan, aimed at retaining key employees and increasing productivity, in August. According to the plan, the company will offer a pool of 848 million shares at an exercise price of 3.79 yuan (59 U.S. cents) apiece to no more than 7,550 people. Some 10% of the shares will be reserved for future employees with expertise in areas like intellectual property and information technology.

The exercise price is more than 44% below the Thursday close of 6.85 yuan for China United Network Communications Ltd., meaning employees in the plan could profit handsomely if the stock stays the same or rises by the exercise date.

To cut bloat and boost earnings, the massive state-owned company has embarked on a massive reform campaign since summer, when it officially introduced private investors like Tencent Holdings Ltd., Baidu Inc. and Alibaba Group Holding Ltd. under a mixed-ownership reform pilot program being promoted by Beijing.

As part of the program, the company has also launched a massive reorganization to become more lean and efficient, including stricter employee performance reviews. Employees selected to participate in the equity incentive plan, already considered the company’s most valuable personnel, will still have to meet high targets in order to redeem their shares in three portions over a five-year period.

To redeem the first portion of their allocated shares, employees must help the company achieve 65.45% or higher total profit growth in 2018, among other requirements.

“The group will measure these targets on a division-by-division basis, so even if China Unicom as a whole achieves the targets, if the division doesn’t meet them, we still won’t be able to exercise our option to buy the shares,” a staffer said.

Multiple staffers told Caixin that while they were excited about the incentive plan, they were also “under a lot of pressure.” On average, employees participating in the plan will be permitted to buy 101,000 shares at the discounted price — adding up to around 380,000 yuan in payments by the employee over five years.

“This isn’t a small sum, and we don’t know what the future trend for China Unicom’s share price will be,” an employee told Caixin. “Also, the lock-up period is very long, so there’s still some worry.”

According to details published by the company in August, employees won’t be allowed to sell their shares for the first two years after they purchase them. Additionally, if employees wish to purchase all of their individual stock allocations, they must stay at their job for the next 60 months.

Unicom said in August that the policy was designed to prevent employees from taking advantage of the discounted price and arbitraging their shares all in one go.