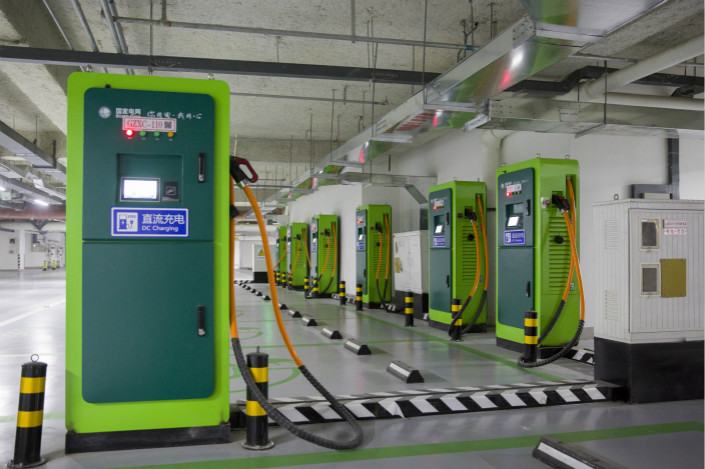 Pictured is the largest electric vehicle charging station in central Beijing, located in an underground parking lot in the Qianmen neighborhood. The low usage rate of such public charging stations, and the corresponding low profits, has diminished investor enthusiasm. Photo: Visual China

Though China has the world’s largest electric vehicle (EV) charging network, its chargers are only used for 15% of the time on average, a senior government official revealed.

Liu’s remarks come amid China’s attempt to transition from traditional-fuel cars to electric vehicles. In September, a high-level official announced that China was planning a ban on gasoline and diesel vehicles “in the near future.” The government has been offering subsidies for electric vehicle producers since 2010, but said it will phase them out by 2020, in response to overcapacity in the industry and growing numbers of poor-quality automakers taking advantage of the financial support.

Many EV drivers with private charging points at home or work don’t consider public charging stations their primary power source, but depend on them as a back-up option. At the same time, those who wish to use public charging sites face problems like inconvenient charging processes, or long charging times, pushing down actual usage. As a result, charging companies don’t make profits, and investor enthusiasm is diminishing, Liu said.

A Shanghai schoolteacher who drives a BYD Qin hybrid sedan told Caixin that she has thought about using public chargers near her home, but they are “all so complicated to use,” and some are “just for show” and don’t actually provide power. Competition among Chinese EV charging companies in recent years has resulted in the need for various payment methods and apps that aren’t compatible with each other.

Additionally, spots reserved for public charging are frequently taken up by non-users, including traditional gasoline-fueled cars, a staffer at a major auto company told Caixin.

“The best solution would be to use parking space locks,” she added. “Manage them using technology.”

The National Energy Administration is calling for increased cooperation between charging point companies and the auto industry, Liu said at Saturday’s event.

At the moment, China’s auto industry is minimally involved in the charging services industry. After cars are sold, the work of charging point construction and operation is usually left to a company that specializes in charging.

But improvements in charging technology require coordination between those charger companies and automakers. Even though China’s charging capacity is large, its technical standards are relatively low, Liu said.

Underutilization isn’t the only hurdle China’s charging operators must overcome. As China promotes the use of distributed renewable power generation, and with solar power expected to become cheaper than coal power within the next five to 10 years, charging infrastructure needs to be built with the use of renewable energy in mind, according to Ouyang Minggao, chairman of China EV100, an association of policymakers, academics, and electric vehicle industry participants.