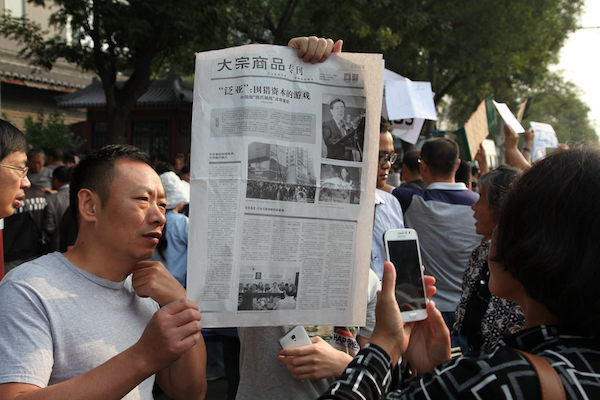 Financial fraud on the internet is challenging local regulators. Above: Investors of Yunnan Fanya Metal Exchange protest outside the China Securities Regulatory Commission in Beijing in September 2015, demanding the central government investigate the platform.

Fraudulent schemes on the internet leading to huge losses for millions of investors are the latest target of China’s top financial regulators.

But the mission to drive online swindlers out of business is being hampered by weakness at the local level, where authorities lack clout, a clear mandate and adequate manpower.

And because the internet makes wide-scale scamming easy – providing access to investors anywhere – fraudsters can quickly close shop and move elsewhere if they start to feel the heat in a city where they were only loosely connected. Stretched local authorities are left feeling like they are playing the Whack-a-Mole arcade game, where the target of their investigation pops up somewhere else, in a city where they have no jurisdiction.

“Beijing has over 80 microloan companies plus 400 online lending firms. But there are only several people in the office (overseeing each sector),” said one official at the Beijing municipal financial bureau.

In theory, local and central investigators work in tandem. But headline-grabbing cases of alleged online fraud highlight weaknesses that allow fraudsters to continue to bilk investors out of their savings long after they have first come to the attention of local investigators.

The recent case against Qbao suggests how misconduct survives and grows in the cracks. The online wealth management company allegedly raised $11 billion from millions of investors in what, if proven true, would be the largest online investment scam in China’s history.

Over a seven-year period, Qbao’s rags-to-riches promises drew the scrutiny of local officials. But Qbao had a simple antidote: It simply moved its base to other cities. The easy evasion allowed Qbao to keep luring in more investors. It took intervention by the central government to shut Qbao’s site down and force the founder to surrender.

Other cases highlight the tension that can play out in localities, where some officials want the tax and other benefits coming from successful – albeit dubious – online investment sites. Peer-to-peer lending site Ezubo and nonferrous metals trading platform Fanya Metal Exchange thrived under local authorities’ tolerance, with resulting losses for countless investors, until the central government stepped in.

Adding muscle to a scrawny system

China’s effort to get local frontlines involved in battling financial fraud dates back to 2002. That’s when Beijing set up financial supervisory bureaus under local governments to oversee the local financial industry and assist in regulatory tasks of the central bank and the three central government commissions that govern the banking, securities and insurance sectors.

However, a systemic arrangement guiding local financial regulation has never been in place, said a source close to the central bank.

The lack of clearly defined responsibilities and the power to enforce law and regulation has restrained local-level financial regulators from acting swiftly against suspicious activities, a local government financial regulatory official said.

In addition, local financial regulators lack independence as affiliated departments under the local government. This can create tension between competing goals of regulating aggressively and promoting growth, said Chen Daofu, deputy director of the Research Institute of Finance with the State Council's Development Research Center.

For instance, before the 2015 collapse of Fanya Metal Exchange, which was accused of illegally raising 43 billion yuan ($6.67 billion) in funds, the then-director of the financial bureau of Yunnan province, where Fanya was registered, applauded the company for its tax contribution and pledged support to the company.

Officials at the meeting decided that local financial regulators should be responsible to work out detailed industry policies and guidelines to supervise local financial institutions based on general rules set by the central bank and three financial-regulatory commissions.

Since late last year, financial bureaus or offices of several provincial and municipal governments – including in Shandong, Jiangsu, Shenzhen and Shanghai – were renamed as financial regulatory bureaus, marking a first step to elevate their position and clarify their duties.

That puts a heavy workload on local financial regulatory bodies, which usually have only a few dozen employees. Caixin’s rough calculation based on business registration records shows that more than 183 million companies fall under the catalog of institutions under local supervision in the country’s 31 provinces, municipalities and regions. And that doesn’t include the fast-growing internet financial platforms.

In Guangzhou, the city financial bureau has 45 staffers and each of them has to oversee dozens of institutions operating in the city, according to a bureau official.

The explosion of internet financing firms, whose business reach usually expand beyond their registration location, complicates the job of local regulators, who are hesitant to venture beyond their jurisdictions.

“The biggest challenge for local financial supervision is to identify risky practices before crisis breaks out,” said Chen of the Research Institute of Finance.

Technology has become a powerful weapon for regulators, Chen said. Authorities in Beijing, Shenzhen and Shanghai have turned to new technology methods to boost their ability to detect violations.

In late December, the Shenzhen financial bureau unveiled two financial data systems under the partnership with Tencent: One gathers business operation data of financial institutions in the city and the other monitors potential financial risks, such as possible illegal fundraising, by analyzing data collected from the internet.

According to He Xiaojun, director of the Shenzhen financial bureau, the partnership leverages Tencent’s tech capacity to scan and analyze internet data to detect abnormal activities, such as a sudden increase in user registrations and aggressive marketing practices. The system submits suspicious findings to the regulators for further investigation.

Among the 26 suspicious cases that Tencent’s system recently reported, the Shenzhen financial bureau determined seven were highly risky cases and passed one on to police for further investigation, He said.

Other cities, including Beijing, Shanghai and Guangzhou, have also set up similar platforms using cutting-edge technologies – from big data to artificial intelligence and block-chain – to monitor potential financial irregularities in their region.

But to clearly trace and identify financial risks still needs boots on the ground – which are in big shortage at local financial regulatory bodies, He said.

In July 2017, the Ministry of Finance and the National Development and Reform Commission decided to abolish financial supervisory fees paid by companies to local governments as part of efforts to cut business costs. But a source close to the central bank said the move will further squeeze local financial regulators because they helped pay for more spot checks. “It is a step backward,” the source said.

The fundamental issues hindering local financial regulation are the ambiguous division of regulatory responsibility between the central and local levels as well as the lack of legal weapons for local regulators to act, said a local financial bureau official.

A source close to the Beijing financial bureau said that before the police crackdown in 2015 on Ezubo – an online peer-to-peer lending service ultimately shut down for running a Ponzi scheme – the city’s financial risk monitoring system had detected suspicious activity.

The Beijing financial bureau held a meeting with executives of Ezubo asking that the suspected wrongdoing be corrected. But the Ezubo executives refused, contending the regulators didn’t have legal authority to order it about, the source said.

It wasn’t until December 2015 that Ezubo’s business was shut down by police in multiple Chinese jurisdictions. An investigation determined that, from its launch in July 2014 until the end of 2015, Ezuba had swindled about 900,000 investors across the country out of more than 50 billion yuan ($7.4 billion) by fabricating high-yield investment products.

Under current rules, local financial bureaus can impose as much as 100,000 yuan in fines on violators. But most of the time, they can only issue warnings without mandatory punishment.

“(We) can neither punish nor order a closure. Without regulatory measures, what can be done is very limited – it’s basically warnings,” said the local financial bureau official.