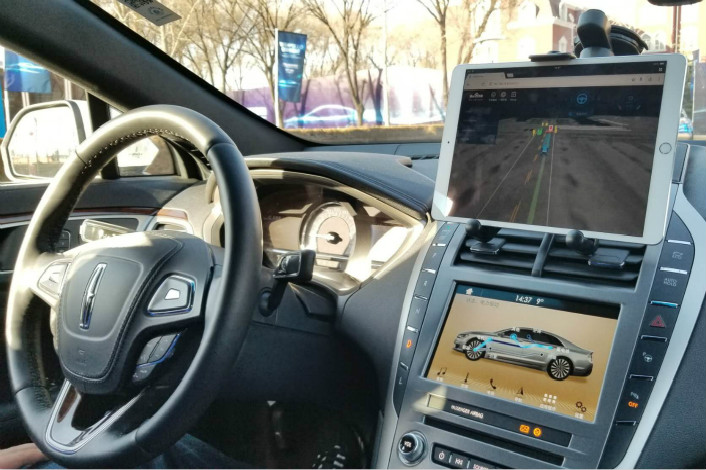 A car using Baidu’s autonomous vehicle technology drives through Xiongan New Area in northern China on Dec. 20. On Tuesday, Wu Xuebin confirmed that he had stepped down as vice president of the company’s self-driving division. Photo: Visual China

Baidu Inc. has lost another key figure from its autonomous driving unit, as the internet giant continues its bumpy shift from search engine advertising to artificial intelligence.

Wu Xuebin — who joined Baidu in September 2016 after 20 years in the auto sector — confirmed to Caixin on Tuesday that he has stepped down as vice president of the company’s self-driving division.

Wu did not say what he would do next, though there were unconfirmed reports in online media that he was set to join the automotive unit of Chinese property and finance conglomerate Baoneng Group.

Several prominent figures from Baidu’s artificial intelligence businesses have left recently. Last year, a senior vice president resigned to found his own driverless car company in the U.S. Baidu is now suing that ex-employee, Wang Jin, and his startup, Jingchi Corp., accusing him of stealing commercial secrets, which Wang denies.

The losses could pose challenges for the 18-year-old company at a time when it is shifting from its core search engine advertising business to the rapidly evolving artificial intelligence industry — where it will need to catch up with rivals Tencent Holdings Ltd. and Alibaba Group Holding Ltd.

Baidu’s forays into self-driving cars began in 2013, but culminated last year with the launch of its Apollo program — an open software platform that enables users to set up their own autonomous driving system. The company said the platform has been utilized by more than 90 companies, including Microsoft Corp. and Dutch navigation and mapping company TomTom NV.

In September, Baidu said it was allocating 10 billion yuan ($1.52 billion) to support the Apollo project.

Baidu is also coopering with traditional automakers, most notably state-owned Anhui Jianghuai Automobile Co., with whom it has plans to roll out a partially self-driving car, which is expected to hit the mass market by the second half of 2019.