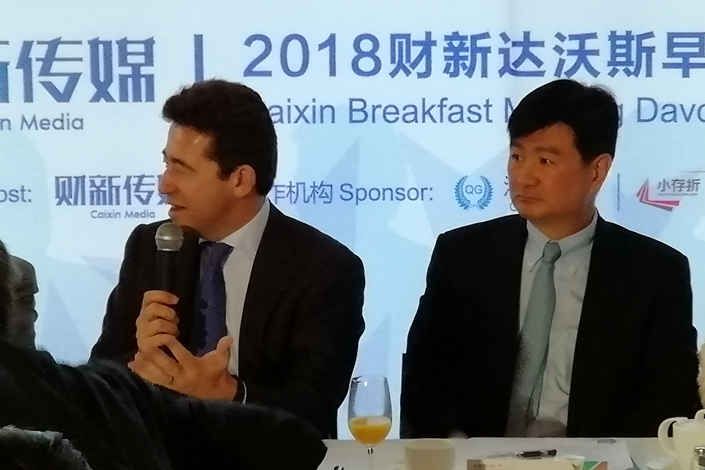 (Davos, Switzerland) Two years after their launch in China, a group of third-party mobile payment services led by global giant Apple Inc. make up only a small fraction of contactless payments in the country, but the number is growing quickly, a top official with their payment partner UnionPay told Caixin.

About 20% of UnionPay’s 94 trillion yuan ($14.2 trillion) in annual transaction volume now comes from near field communication (NFC) technology payments, a newer technology that allows people to pay for items using smartphones over short distances without swiping a card. But of those NFC transactions, only a very small number come from Apple’s ApplePay, as well as similar third-party payment systems operated by South Korea’s Samsung and China’s own Huawei, UnionPay corporate strategy chief Liu Yuan told Caixin on Wednesday.

“The transaction volume isn’t too large, but it’s growing fast,” Liu said at a Caixin event on the sidelines of the annual World Economic Forum taking place this week in Davos, Switzerland. “Apple is the largest of those third-party operators in terms of transactions.”

UnionPay operates China’s largest and main electronic transaction-clearing network, including about 10 million merchants equipped to handle NFC transactions, Liu said. Apple made headlines about two years ago when it announced a deal with UnionPay that made it the first major foreign company to offer its NFC-based ApplePay services in the country. Samsung and Huawei followed with similar announcements later in the year.

UnionPay was formed about two decades ago as China’s answer to global giants MasterCard and Visa, running a national settlement system that allows banks to conduct transactions across each other’s networks. The company’s cards are now accepted in more than 2 million ATMs globally, with coverage in most of the world.

But Beijing has been slow to offer reciprocal rights allowing Visa, MasterCard and other foreign operators to offer local currency-denominated services in China, despite a 2012 ruling by the World Trade Organization ordering it to do so. Yuan said he is not privy to internal discussions at China’s financial regulators, but said he expects those regulators are still crafting a specific execution plan.

“This is a big decision,” he said. “There could also be security issues.”

Separately, Liu said UnionPay, which is jointly owned by most of China’s major banks, has been considering an IPO since as early as 2010, but hasn’t made a decision on whether to move forward with such a plan. He added such a move could help to raise the company’s profile and make it more transparent as it attempts to go global.

“We’ve discussed it and studied it, but there’s still no decision yet,” he said.