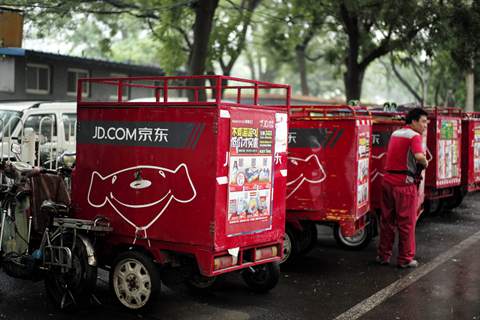 Chinese e-commerce giant JD.com Inc. has kicked off a funding round to raise up to $2 billion for its logistics unit, as it prepares for an independent listing of one of its business backbones, sources close to JD.com told Caixin.

JD Logistics was valued at $10.9 billion in the funding round, according to fundraising documents viewed by Caixin.

A person close to JD.com said Hillhouse Capital is among the leading investors of the funding round. Neither JD.com and Hillhouse has commented.

JD.com Chief Executive Richard Liu disclosed the fundraising of the logistics unit Tuesday on the sidelines of the World Economic Forum happening this week in Davos, Switzerland. Liu said the unit is raising money for a future independent listing.

“We hope it can list in Hong Kong or in China. But it is still too early to say when or where,” he said.

The logistics unit – which is in-house and considered highly efficient – is seen a major competitive edge of JD.com, China’s second largest e-commerce company. Most e-commerce firms, including the largest player, Alibaba Group, have largely relied on third-party logistics firms for delivery services. Alibaba set up its own logistics network Cainiao in 2013, which mainly provides infrastructure services for partner couriers.

JD.com spun off its in-house delivery platform into JD Logistics in April. The fundraising and spinoff of JD Logistics came less than half a year after JD announced a similar move for its finance unit, which also was to pave the way for an eventual separate listing. The spinoffs are part of a broader strategy by JD.com to separately monetize its four main business areas – its core e-commerce, as well as its logistics, finance and technology.

According to JD Logistics’ fundraising documents, transactions of the investments are set to be completed by March 1. JD Logistics will start initial public offering process upon the company’s board’s agreement or when the unit’s market value exceeds $20 billion.

In the first three quarters of 2017, JD Logistics registered a combined 18.3 billion yuan ($2.9 billion) in revenue. Annual revenue for 2017 is projected at 26.4 billion yuan, according to the documents.

But the unit reported quarterly profit only in the second quarter, at 162 million yuan. Net losses of the first and third quarter were 309 million yuan and 295 million yuan, respectively.

The figures on the documents differed from a previous statement made by Wang Zhenhui, CEO of JD Logistics, who said JD Logistics was seeing 30 billion yuan in annualized revenue. JD Logistics didn’t respond Caixin’s inquiry on the matter.

In a July interview with Caixin, Wang said daily orders received by JD Logistics had reached 1 million orders. In December, Fu Bing, vice president of JD.com, told media that JD Logistics has seen faster growth in orders placed by merchants outside of JD.com’s e-commerce platform since it opened the services to non-JD.com merchants in November 2016. Fu expected to see JD Logistics’ business with outside merchants to exceed its orders from its JD.com network of merchants in three to five years.