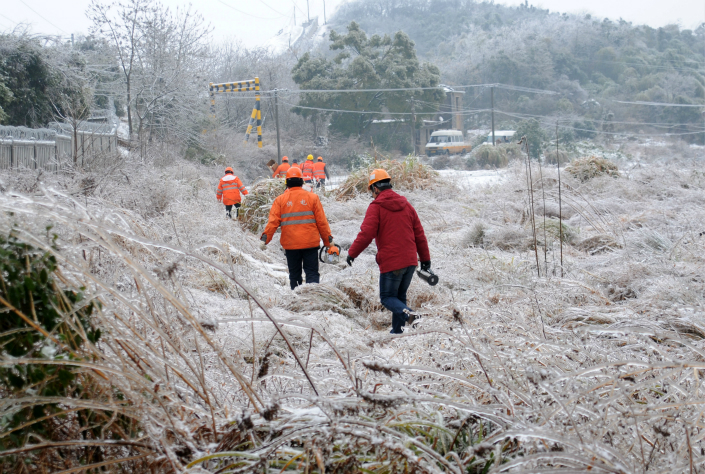 Workers in China’s southern Jiangxi province make their way to the fault location of a power line covered by snow and ice on Sunday. Photo: VCG

According to a Hunan government document obtained by Caixin, the province’s power load — the electrical capacity being used at a given point in time — reached a record high of 27.8 million kilowatts on Thursday. The Hunan government expects continued cold weather to raise the load even further in the coming days, to 28.5 million kilowatts, straining the province’s electrical grid.

Province-wide restrictions on industrial users that consume large amounts of electricity, as well as on nonessential lighting in cities, came into effect on Friday, the document said.

The two provinces are struggling to meet demand for power amid a cold front that has been sweeping across China. After blizzards in the region last week, temperatures in subtropical Jiangxi fell below freezing on Monday, and are predicted to drop to minus 4 C in some parts of Hunan by Monday night. The Jiangxi and Hunan governments predict that, over the next few days, their power production capacity will fall short of users’ needs by 1 million kilowatt-hours and 1.4 million kilowatt-hours, respectively.

Regional shortages highlight a larger problem in China’s national grid — allocating the power generated to those who actually need it.

Figures from the China Electric Power Enterprise Federation show that China’s power generating capacity was fully used for a cumulative 3,416 hours from January to November 2017, the lowest usage level in six years of steady decline, showing that national supply actually outstrips demand. However, due to a lack of coordination between provinces, and difficulties transferring electricity across regions, generators frequently lie idle in one region while another suffers shortages.