New-Energy Car Startups to Hit the Road in 2018

By Xiao Ying and Coco Feng 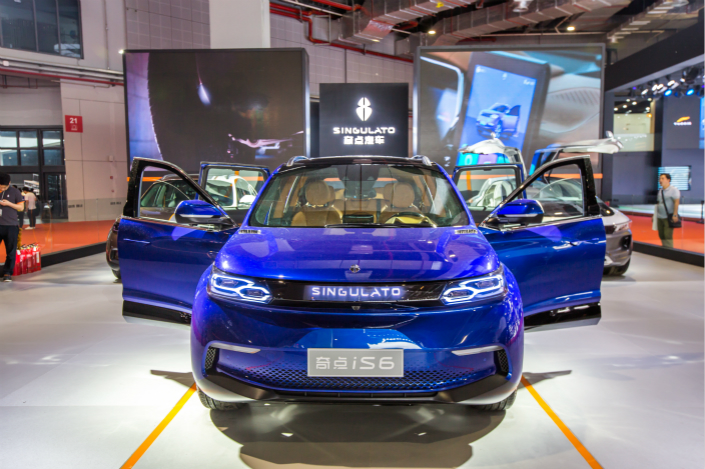 Singulato Motors, one of the four Chinese new-energy vehicle startups planning to launch their first mass-produced models this year, unveiled its all-electric iS6 SUV at an auto show in Shanghai on April 26. Photo: VCG

Among the 20-ish new-energy car startups in China that wish to copy Tesla Inc.’s success, four have taken the lead — and they all plan to launch their first mass-produced models this year.

Xiaopeng Motors, also known as Xpeng, announced Monday that it would launch an electric sport utility vehicle (SUV) within the year for the Chinese market. On the same day, the company said it has completed a new fundraising round worth 2.2 billion yuan ($348 million), with investments from Alibaba Group Holding Ltd., Foxconn Technology Group and IDG Capital.

The Xiaopeng SUV is capable of parking itself and will be equipped with “self-driving technology suitable for Asian roads,” according to a company statement.

The news came just four days after rival Singulato Motors said it will deliver new cars to buyers this year. The company says its vehicle, which is now equipped with a semi-autonomous pilot system that works under human supervision, will be able to operate without monitoring by 2019.

Two other startups have similar plans. Nio plans to offer customers its first model by the end of this June, while Weltmeister Motor, or WM, will put its first commercial model on sale sometime this year.

The companies will face more challenges over the coming year than Tesla has previously, as the U.S.-based company has enjoyed a golden age of little competition over the past decade, an industry observer told Caixin.

The startups will also copy Tesla’s sales model, doing away with the traditional dealership model and instead running their own stores.

Establishing a car dealership costs around 10 million yuan ($1.6 million), while it costs only 25% of that to build an “experience store,” said Chen Yusong, general manager of Singulato’s sales unit. In this sales model, the individual manufacturers, rather than dealerships, take care of after-sales services.

Singulato, which opened its first experience store last week, plans to build 200 over the next three years. Nio already has four stores.

All four startups have partnered with larger automakers for the purposes of manufacturing — Nio, for example, has tied up with Anhui Jianghuai Automobile Co. Ltd. — as the startups haven’t obtained official approval to manufacture electric vehicles.

The government suspended reviewing new applications for electric car production during the second half of 2017 as they were investigating whether the sector was experiencing excessive production capacity. The process resumed in December.