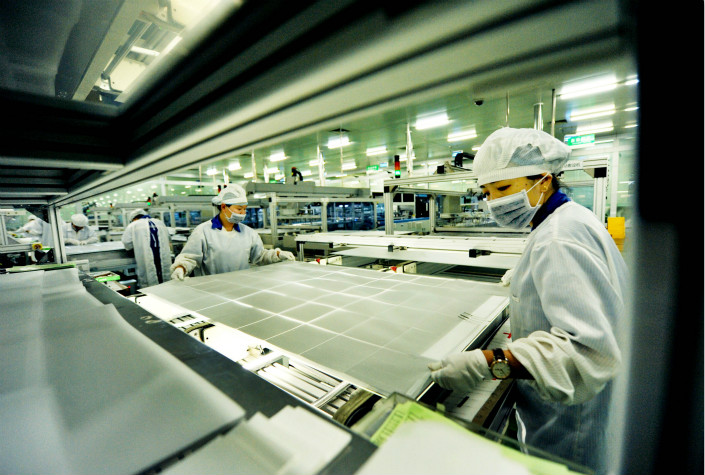 Workers at a JinkoSolar factory in China's Jiangxi province assemble solar panels for export to South Africa in 2015. The company announced that its board of directors had authorized the company to make final plans for “an advanced solar manufacturing facility in the U.S.” Photo: IC

The announcement — made briefly at the end of a statement about a supply agreement with a U.S. buyer — said that its board of directors had authorized the company to make final plans for “an advanced solar manufacturing facility in the U.S.”

The company did not specify a reason for the decision but said it would continue to “closely monitor treatment of imports of solar cells and modules under the U.S. trade laws.”

JinkoSolar employs over 15,000 people across eight manufacturing sites in China, Malaysia, Portugal and South Africa, as well as through 16 overseas subsidiaries and 18 sales offices. The planned U.S. facility will be JinkoSolar’s first in the country, where the company currently conducts business through a San Francisco-based subsidiary.

The U.S. tariff hike on solar power equipment — which could be as high as 30% — has widely been seen as a blow against Chinese companies, which are the world’s top manufacturers of solar panels. Made-in-China solar products accounted for 21% of the products used in the U.S. in 2016, even after years of American anti-dumping and anti-subsidy investigations into Chinese companies.

Wang Hejun, head of the Trade Remedy and Investigation Bureau of China’s Ministry of Commerce, has described the U.S. move as “excessive trade protectionism” that “will not save the related industries, but prevent economic development from proceeding in a balanced manner.”

JinkoSolar did not specify the size or location of its planned U.S. factory, but a local newspaper in Jacksonville, Florida, reported that JinkoSolar was most likely the unnamed company entering a $410 million factory-building deal with the city.