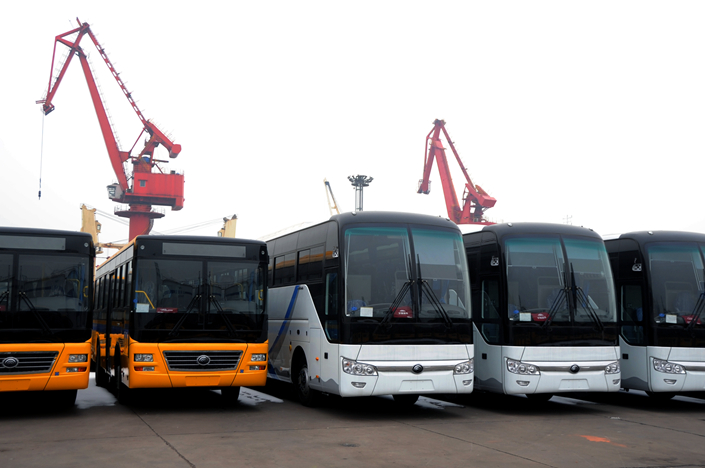 Chinese-made buses get ready to be shipped for export on Wednesday at a port in Lianyungang, Jiangsu province. Photo: VCG

The Caixin China General Manufacturing Purchasing Managers’ Index (PMI) came in at 51.5 last month, unchanged from that in December, which was the highest reading since August.

The indicator is closely watched by investors as one of the first available monthly barometers of the health of the world’s second-largest economy. A number greater than 50 indicates an expansion in activity, while a reading of less than 50 means a contraction.

Growth in production was the fastest in 13 months in January, with a number of companies surveyed reporting that improving demand conditions and rising new work led them to raise output.

New orders rose for the 19th straight month, though at a slower pace than in December. The increase in new export sales also softened from the previous month, but remained the second-highest rate in five months.

“The manufacturing industry had a good start to 2018,” said Zhong Zhengsheng, director of macroeconomic analysis at CEBM Group, a subsidiary of Caixin Insight Group. “Going forward, we should keep a close eye on the stability of the demand side.”

Companies continued to reduce their payrolls last month, but at the slowest pace since February 2015.

Inflation in input costs eased to a five-month low in January, but remained sharp overall, with companies commonly complaining about higher prices for raw materials such as metals and packaging. However, factory gate charges — the prices of the products available at the factory, excluding any delivery charges — rose only slightly, reflecting that it was not easy for manufacturers to pass the higher costs on to their customers.

Manufacturers’ optimism about their prospects over the next 12 months strengthened to a four-month high in January on expectations of improving market conditions, promotional activities and new product launches.

Manufacturing investment also recovered. Although still moderate, the 4.8% growth rate strengthened from 4.2% in 2016 and marked the first pickup in six years, according to figures from the National Bureau of Statistics (NBS).

But uncertainties weigh on the country’s growth outlook due to trade tensions with major partners such as the U.S. under President Donald Trump, who has taken a hard-line policy against Chinese exports and investment, and the Chinese government’s campaign to lower the debt levels of the financial, corporate and household sectors to contain risks, as well as its efforts to reduce pollution, which may affect heavy industry production.

The official PMI fell to 51.3 in January from 51.6 in December, the lowest reading in eight month, as foreign demand contracted for the first time in 15 months.

The Caixin PMI focuses more on light industry, while heavy industry makes up a larger proportion of the NBS survey. The geographic distributions of the companies covered in the two polls are also different.

The official nonmanufacturing PMI, which covers the nation’s services and construction sectors, increased to 55.3 from 55 in the previous month.

The Caixin China General Services Business Activity Index will be published on Monday.