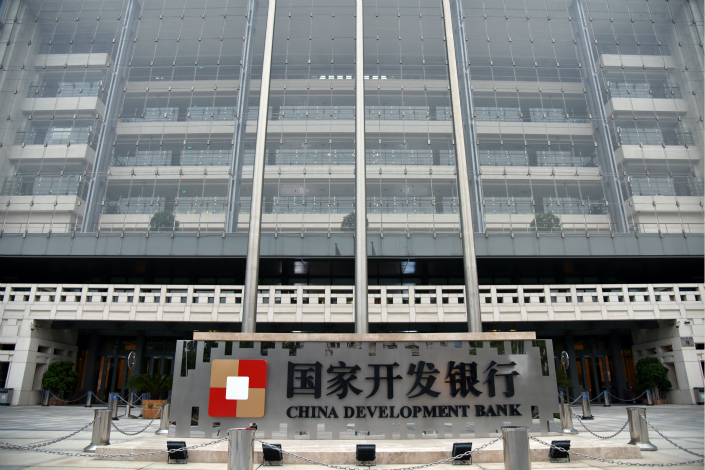 China Development Bank's Beijing headquarters is seen on Oct. 26. The policy lender will provide Standard Chartered Bank with the equivalent of $1.6 billion over the next five years to lend to projects in 45 markets along the "Belt and Road" initiative. Photo: VCG

The two banks signed a memorandum of understanding on Thursday during British Prime Minister Theresa May’s visit to Beijing. The agreement will see a total $12.8 billion worth of business deals covering construction, finance, agriculture and technology.

Under the agreement between the two lenders, CDB will provide Standard Chartered Bank an equivalent of 10 billion yuan ($1.6 billion) over the next five years to lend to corporate finance projects and trade finance transactions in 45 of the markets along the Belt and Road routes where the British bank “has a deep and long-standing presence,” the London-based institution said in a statement on Thursday.

The Belt and Road initiative, proposed by President Xi Jinping in 2013, aims at strengthening China’s ties with Asian, African and European nations mainly through infrastructure investment and trade.

Standard Chartered will make the drawdown decisions, and take the credit risk of the borrowers, the statement said.

“Leveraging Standard Chartered’s rich expertise and extensive network in Asia, Africa and the Middle East will enable China Development Bank to further enhance the commercial viability and sustainability of those projects,” the bank quoted CDB Chairman Hu Huaibang as saying.

Bill Winters, group chief executive of Standard Chartered PLC, said in the statement that some of the loans will be provided in the Chinese currency, the yuan.

“Through cooperation, financial institutions can not only pool together and optimize the usage of financial resources, but help clients mitigate or avoid risks,” he said.

China Development Bank is the biggest government-backed policy bank involved in investment and financing in foreign countries. As of 2017, the bank has extended a combined $180 billion in loans to countries along the Belt and Road routes, according to the bank’s figures.