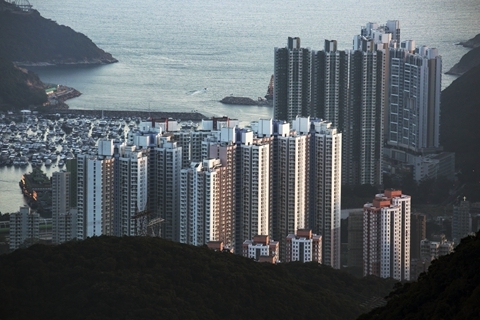 A median income household in Hong Kong needs to spend 19.4 years without any other expenditure to afford a home, making the city the least affordable housing market in the world, said Demographia. Photo: Visual China

The Hong Kong property market is on fire. And it’s only expected to get hotter.

Home prices in the city surged for the 21st straight month in December and reached another fresh peak in one of the most expensive property markets in the world.

A government monthly home price index rose 1.4% in December from the previous month to 352.8, setting a new record for the 14th straight month, according to data released Wednesday by the Hong Kong Rating and Valuation Department.

This housing boom marathon began in April 2016, followed by a 10% surge in just six months. In efforts to cool the heated housing market and make homes more affordable for local residents, the Hong Kong government raised the stamp duty for those not buying for the first time to 15% in November 2016.

In April 2017, the government further tightened property rules by requiring first-time buyers who make multiple purchases in a single transaction to pay the same 15% stamp duty that applies to second-time buyers.

Analysts attributed the property price surge to strong economic growth and run-up in the stock market. Hong Kong is expected to announce a GDP growth of 3.7% for 2017, one percentage point higher than the government predicted at the beginning of the year.

Alva To Yu-hung, vice president of Greater China at DTZ Cushman &Wakefield, expects housing prices will rise another 10% to 15% in the first half of 2018, based on strong outcomes of government land sales. Many developers bought lots at prices even higher than current home prices, showing developers’ optimism about the housing market outlook in the next three to five years.

But To said that any big volatility in the stock market or significant interest rate increase in Hong Kong could cool down the housing market.

The U.S. Federal Reserve is widely expected to raise interest rates at least three times this year. To maintain the Hong Kong dollar’s peg to the US dollar, Hong Kong would have to increase its interest rates.

Hong Kong Financial Secretary Paul Chan Mo-po has raised concerns that ever-increasing property prices have imposed a heavy burden on local residents, some of whom might have a tough time keeping up with mortgage repayments.

Hong Kong has been named the least affordable housing market for eight consecutive years, according to the International Housing Affordability survey released in late January.

The survey, released by urban planning policy consultancy Demographia, says that a median income household in Hong Kong needs to spend 19.4 years without any other expenditure in order to be able to afford a home.