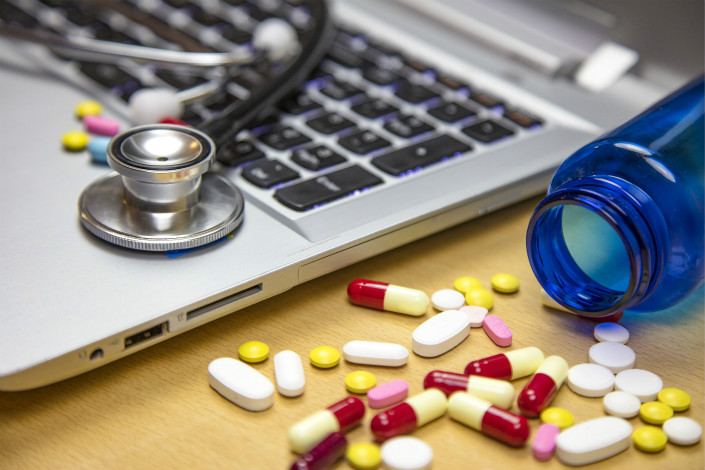 The new regulation comes as online drug transactions have surged in China in recent years. The trading volume increased nearly 88% year-on-year to 28.6 billion yuan ($4.5 billion) in 2016 and will reach 140 billion yuan by 2022, according to a consultancy. Photo: VCG

China is set to intensify oversight of online drugstores, including ones backed by e-commerce giants Alibaba Group Holding Ltd. and JD.com Inc., in an attempt to reduce the illegal import and sale of medicines.

The China Food and Drug Administration (CFDA) has assigned the task to an affiliated research institute, which will establish a monitoring system within a month, according to a CFDA statement.

The monitor will first target online drugstores, including the ones run by Alibaba’s Tmall and JD.com, and then expand to transactions on social media platforms such as Sina Weibo and WeChat, an instant messaging app run by Tencent Holdings Ltd.

The monitoring system will scan all transaction data, and submit questionable data to local drug regulators, which will then report to the CFDA.

The regulation comes as online drug transactions have surged in China in recent years. The trading volume increased nearly 88% year-on-year to 28.6 billion yuan ($4.5 billion) in 2016 and will reach 140 billion yuan by 2022, according to Shenzhen-based consultancy Forward Industry Research Institute.

The internet has opened new avenues for Chinese consumers to purchase drugs within China’s borders, but has also expanded access to medicines from overseas pharmaceuticals, many of which are then resold domestically.

However, the CDFA said that in many cases these deals involve “unauthorized imports” of medicines, and that “it is hard for buyers to determine the authenticity of the drugs.”

Last year, a woman in Beijing hallucinated after taking what she thought were overseas-produced diet pills that she bought from a contact on WeChat, China’s leading social media platform. In fact, the drug had been manufactured in an apartment in China, and contained an ingredient that had been banned by the CFDA, the government-backed Beijing Times reported.