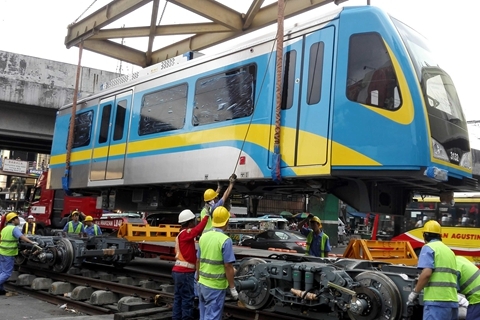 CRRC Dalian built 40 trains for the metro system of the Philippine capital city of Manila. Above: workers assemble a train delivered by CRRC Dalian in Manila. Photo: Visual China

The president of the Philippine Senate is demanding that a Chinese light-rail train maker refund $74 million for 48 overweight trains and be blacklisted from all future government projects.

Philippine Senate President Aquilino Pimentel III demanded a full refund by CRRC Dalian Co. Ltd., which delivered 48 light-rail coaches in 2016 that exceeded the weight limit for the Metro Rail Transit (MRT) system in Manila, according to a statement posted on Saturday on the Senate’s website.

“Canceling the contract and returning the coaches are not enough. What we have here is a supplier who knowingly supplied equipment that is not suitable for the MRT. We can’t just let them get away with it with no penalties whatsoever,” Pimentel said in the statement.

All future suppliers of Philippine government projects must “be aware of the consequences of giving defective products for their contracts,” he added.

CRRC Dalian was awarded the contract in 2014 by the Philippine Department of Transportation and Communications (DOTC) to provide the coaches for Manila’s MRT line, the country’s busiest rail line. It was a first for a Chinese rail-equipment company.

The MRT line serves about 600,000 passengers everyday — nearly double its original design capacity of 350,000 daily passengers. The system has been plagued by breakdowns and accidents. The 48 new trains — if put into operation — could increase the capacity by 67%, according to China state media reports.

The first three trains were delivered in 2016. According to reports by the Philippine Star, these trains were 3.4 tons heavier than the contract agreement, triggering concerns that they would wear out the tracks faster and raise safety risks.

The DOTC has tapped TUV Rheinland, a German testing service, to conduct an independent safety assessment for the Chinese-made trains. The department said it would decide whether to keep or return the trains based on TUV’s recommendation. The assessment is expected to be completed by April, according to reports by the Philippine Star.

CRRC Dalian didn’t respond to a request for comment.

In January 2017, CRRC Dalian said all 48 trains had been delivered to the Philippines. The company said in a press release that the wheels of the trains could only be assembled in Manila because of the rail’s special structure, posing a challenge.

A rail-industry insider told Caixin that the assembly shouldn’t affect the weight of a train.

An executive at CRRC, the parent company, said all of the trains should have been weighed before they left the factory. If the trains were overweight, the problem shouldn’t have been discovered only after delivery, the executive said.

In July 2016, another subsidiary of CRRC recalled 26 defective subway trains sold to Singapore after cracks were found in the structure connecting the car body and railroad truck, a structure underneath a train to which wheels are attached, according to reports by Singaporean newspaper The Straits Times.

The manufacturer, CRRC Qingdao Sifang Co., said in a statement later that year that the problem was caused by the aluminum alloy profile used for the train construction and would have little impact on train operation. The trains were repaired and sent back to Singapore and put into operation, according to the statement.