Dilemma for White-Collar Migrants: Where to Own a Home 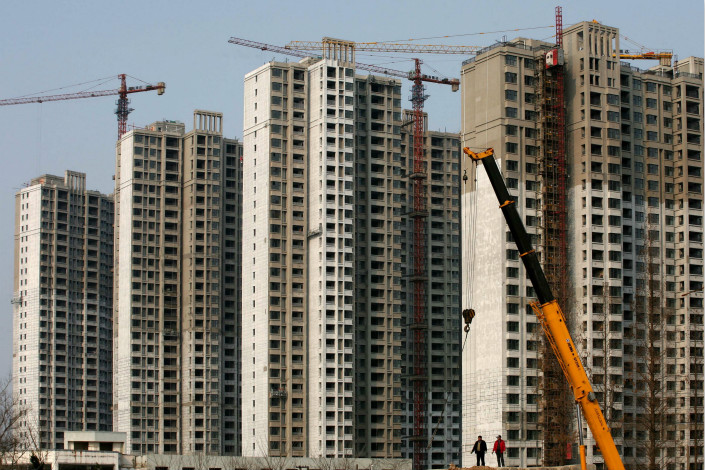 Workers build residential blocks in Changzhou, Jiangsu province on Jan. 29. Of the 600,000 migrants to first- or second-tier surveyed by property group Anjuke, just 25% said they hoped to stay and buy a place in their adopted city, largely on the prospects of career development. Photo: VCG

*Still, a quarter prefer to own a residence in the adopted city where they work

(Beijing) — Nearly 60% of Chinese who’ve left home to work in the country’s big cities want to purchase property back in their hometown, and half of those said they planned to do so within a year, according to a new survey.

The main reasons? Sky-high home prices in cities where they work, and concern for their parents and children.

The study, by real estate agency Anjuke, polled 600,000 Chinese in 2017 who work in a first- or second-tier city away from their hometown. The findings suggested mixed feelings about income, property prices, and family.

Of the 60% who said they wanted to buy a residence in their hometown, nearly a third cited out-of-reach prices in the cities where they work, while another third said they wanted to improve housing conditions for their families. Nearly a quarter are considering moving home eventually for work, and only a tenth said they would buy for investment purposes.

Of the 60% that desired to buy a place back home, nearly a half said they had concrete plans to do so within the next year. Most respondents said they planned to spend less than 1 million yuan ($160,000) on their future home.

By contrast, 25% of the entire group surveyed said they hoped to stay and buy a place in their adopted city, largely on the prospects of career development, the report found.

But in China’s biggest cities, this dream is out of reach for many workers.

Despite a series of policies enacted last year to cool runaway property prices, the average cost of a new home in China rose 22.2% year-on-year in 2017. Prices for the sale of existing homes also grew 22%, according to Anjuke. In first-tier cities, the increases were even larger.

For the price of 6 square meters (65 square feet) in Shenzhen — roughly the size of a bathroom —one could purchase a 62-square-meter home in Jieyang, a third-tier city in Guangdong province, Anjuke said.

Based on Anjuke’s calculations of the average salary for a white-collar worker in Shanghai — which it listed as 7,487 yuan ($1,200) per month — a person would need to save their entire income for 48 years to buy a 90-square-meter home in the metropolis. In the nearby city of Nantong, in Jiangsu province, a similar-size residence could be purchased after just 10 years.

The report said that job opportunities in first-tier cities have declined as people have flooded in, and that second-tier cities such as the southwestern municipality of Chongqing, and the eastern cities of Nanjing and Suzhou, have better potential to accommodate hometown buyers’ needs.

The desire to “look after their parents, and seeking a sense of belonging” will increase the number of people looking to buy in their hometowns, said Zhang Bo, chief analyst at Anjuke.