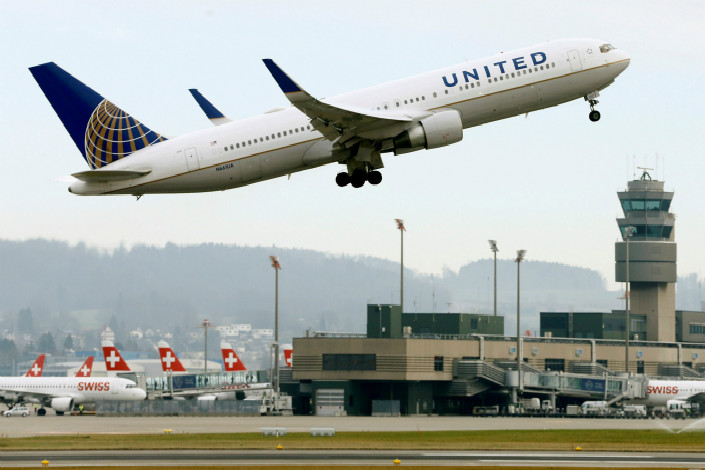 A United Airlines Boeing 767-322ER jetliner takes off from Zurich Airport on Jan. 9. United Airlines said it is pulling back from second-tier Chinese cities for the moment, following the recent cancellation of flights from the U.S. to Hangzhou and Xi’an. Photo: VCG

United Airlines Inc., the leading carrier in routes between the U.S. and China, is pulling back the thrusters on new flights between the countries, following major additions over the last two years that have led to excess capacity.

Walter Dias, managing director of the airline’s Greater China and Korea operations, told Caixin that the carrier is also pulling back from second-tier Chinese cities for the moment, following the recent cancellation of flights between the U.S. and Hangzhou in eastern China and Xi’an in the nation’s interior.

The U.S. company has been flying to China for about three decades, and now operates 93 weekly flights between the country and its home country. It is the leading carrier for Sino-U.S. routes, with just over 20% share of all traffic in the first half of last year, followed by domestic carrier Air China Ltd. with 18.9%, according to industry data.

But the recent addition of capacity by United and U.S. rivals like Delta Air Lines Inc. and American Airlines Inc., as well as China’s big three carriers, has led to overcapacity that will take a period to fill if demand continues on its recent growth track, Dias said.

“It’s been a great growth story,” he said, describing the market for routes between the U.S. and China. “However, a light bulb has suddenly gone off in everyone else’s head. They’ve realized China is a great market, we should fly there. … I always say that the market is the boss, they tell me when we should add a flight. Right now, the market is telling us, ‘Oh man, I had a lot of food, I had to digest this all.’ So right now, I don’t think the market is ready for another new flight.”

China is one of the world’s largest and also fastest-growing commercial aviation markets, with 488 million passengers carried in 2016, according to the World Bank, citing the International Civil Aviation Organization. That number was second only to the U.S., which carried about 823 million passengers. China is expected to overtake the U.S. by 2022, according to a recent forecast by the International Air Transport Association.

International travel is still relatively small compared to the overall figure, though the number of travelers between China and other countries is growing.

United and its two main U.S. rivals, Delta and American Airlines, have all formed tie-ups with Chinese airlines to better serve the market. Delta has a major alliance with China Eastern Airlines, including a $450 million investment in the Shanghai-based carrier. American Airlines has a similar tie-up with China Southern Airlines, including its own $200 million investment. United has a strong alliance with Beijing-based Air China, including code-sharing and linked frequent flyer programs, though without any equity tie-up.

Nearly all of United’s China flights are to the first-tier cities of Beijing, Shanghai and Guangzhou. The lone exception is the interior city of Chengdu. The company had previously launched service to Hangzhou and Xi’an, but canceled both routes over the past year due to insufficient demand. Dias explained that both of those routes were heavily dependent on tourism and thus highly seasonal. What’s more, the addition of capacity in Beijing and Shanghai may have helped to further siphon away traffic from those cities.

“We are still very bullish on China,” he said. “We believe there is no other market in the world that has the opportunities that China has. Even the secondary markets, down the road there’s still a way to build a viable, sustainable service to those markets.”