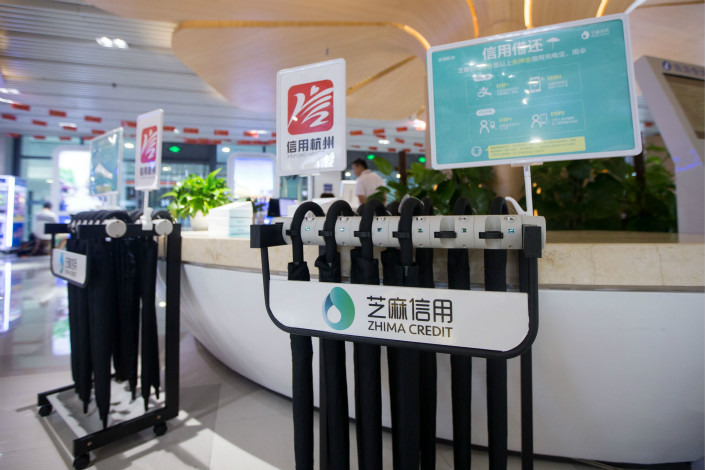 Above, a Zhima Credit umbrella-rental stand is seen in a shopping mall in Hangzhou, Zhejiang province. Zhima Credit has announced it will temporarily cease offering services to unlicensed banks, consumer finance companies, and online microlenders as of March. Photo: VCG

Zhima Credit, known in English as Sesame Credit, will temporarily cease offering services to unlicensed banks, consumer finance companies, and online microlenders as of March, a spokesperson for Ant Financial told Caixin, without specifying how long the new policy will last.

“We maintain a zero-tolerance policy toward any actions that may harm users,” the spokesperson said, adding that the company will no longer work with entities if the review discovers they were engaged in aggressive debt-collection tactics or have violated contracts.

Zhima began an internal review of its partners in August, gradually halting services to unlicensed companies. Recently, it has turned its attention to firms that engage in lending services, the Ant Financial spokesperson told Caixin.

In recent years, a fresh crop of lenders has surfaced that targets customers underserved by China’s banking sector by providing small to midsized short-term loans that often require no collateral.

Personal credit scoring is also undergoing a sea change. In January, the central bank announced it had received an application for the country’s first centralized online personal credit database.

The National Internet Finance Association of China, a quasi-government industry association, would hold a 36% stake in the new company that will run the database. The rest would be divided evenly between eight private companies that run credit scoring services such as Zhima Credit and Tencent Credit Services.

It is unclear how the private firms will differentiate their services from the centralized database once it is launched.

Ant Financial was reprimanded by regulators last month after setting a default option that automatically enrolled users into its credit-rating system. Earlier this month, Caixin learned that Tencent’s credit rating arm pulled a nationwide trial service on regulators’ request because of concerns over misuse of personal credit information.