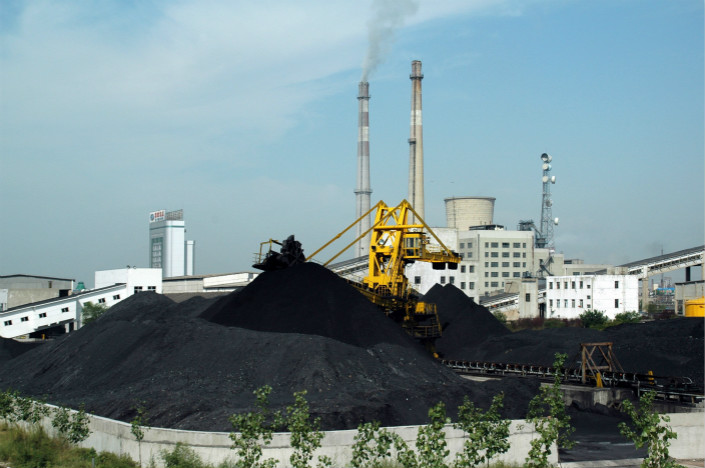 Coal is stored at a power plant in Anhui province. On Jan. 30, the coal inventory at six major power companies including Huaneng Power were down to only 11 days’ worth of coal. Usually, power companies keep at least 15 days’ supply of coal to maintain a secure inventory. Photo: VCG

Power companies’ coal inventories began growing again in February, after severe shortages caused by surging power consumption at the beginning of the year, according to China’s top economic planner.

As temperatures gradually rise, and with factories stopping work during the long Lunar New Year holiday, electricity usage across China is expected to fall in the coming days, and the coal supply should be secure, National Development and Reform Commission (NDRC) spokesperson Wei Meng said at a press conference Sunday.

The average daily volume of coal supplied to power generators in China between Feb. 1 and Feb. 8 was 6.32 million metric tons (6.96 tons), up 7% from the amount produced in late January, while daily electricity consumption was down 5%, Wei said.

Unusually cold weather and blizzards across China drove residential electricity consumption up in recent months. This, combined with a nationwide anti-pollution drive that placed limits on the transportation of coal, caused power generators’ coal inventories to fall to emergency levels by late January.

On Jan. 30, the coal inventory at six major power companies including Huaneng Power were down to only 11 days’ worth of coal, while some electricity producers were left with only two to three days’ supply. Usually, power companies keep at least 15 days’ supply of coal to maintain a secure inventory.

With tightened supply has come higher prices. At the beginning of February, the price of thermal coal at China’s benchmark Qinhuangdao port reached 780 yuan ($123) per metric ton, prompting the NDRC to set a price cap of 750 yuan per ton.

Wei Meng said the NDRC is addressing the coal shortage by ensuring that key coal producers maintain steady production and supply between the Spring Festival and China’s “Two Sessions” legislative meeting in March and strengthening coal transport networks, among other measures.