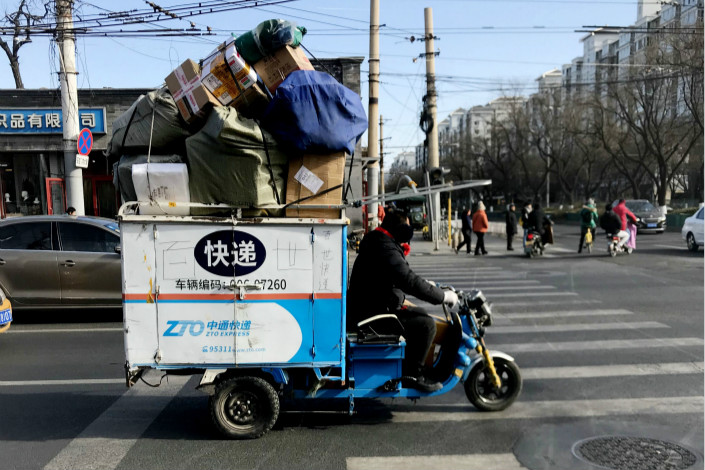 A courier delivers packages in Beijing on Jan. 29. Counterfeits were purchased from nine of 16 online shops targeted by the China Consumers Association in a recent test. Photo: VCG

Counterfeits were purchased from nine of 16 shops targeted by the China Consumers Association in a recent test, according to an association report released last week.

Sixteen of the 53 purchased products — mainly well-known foreign products such as personal care items — could not be authenticated through manufacturer or license checks, the report said (link in Chinese).

Most of the fake goods were sold by third-party merchants with online shops on platforms such as Alibaba Group Holding Ltd.’s Taobao and JD.com Inc.’s platform.

When questioned by Caixin, Kaola and Jumei denied the consumer group's charges. In fact, they said, products they sold that were tested by the association were authentic.

Kaola said it would prove their products' authenticity by presenting verification certificates and other documents to the consumer association. Jumei said it is discussing the findings with the association which so far “hasn’t offered convincing references or complete proof” to back its claims.

The consumer group did not respond to the e-commerce companies’ comments.

Officials from Taobao, JD.com and other e-commerce companies cited in the group's report declined to comment.

Shares of Nasdaq-listed NetEase declined 6% within two days of the report's release Feb. 7. Jumei's shares declined 8.4% over the same period.

The authenticity and quality of products sold by third-party merchants through shops on e-commerce platforms are usually more difficult to verify than those sold directly by platforms.

Piracy claims have frequently tainted the reputations of online shopping platforms in China.

Meanwhile, e-commerce platforms have been working hard to eradicate knock-offs and shore up their images.

Alibaba and Jumei, for example, formed their own anti-piracy alliances and have been promoting their as platforms featuring authentic, well-known brands.