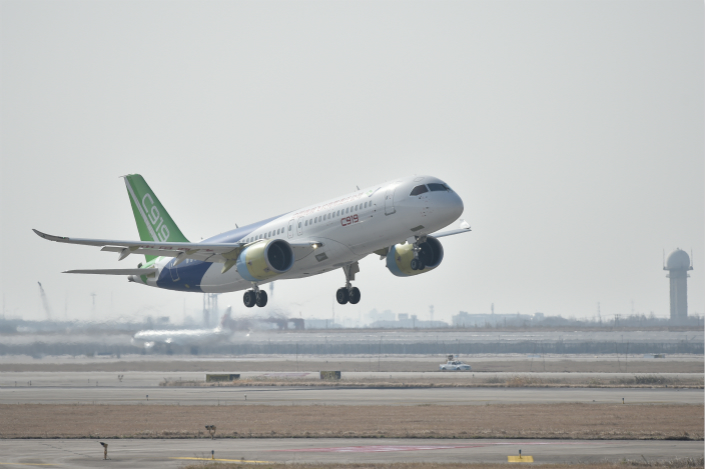 A domestically produced C919 takes off from Shanghai Pudong International Airport during the model's second test flight in December. The airplane's state-owned manufacturer aims to have all its C919s tested within the next five years. Photo: VCG

More than 100 of China’s homegrown C919 passenger jets will undergo airworthiness test flights this year as the aircraft’s producer prepares for mass production.

Commercial Aircraft Corp. of China Ltd. (COMAC) will hand over 102 C919s to the company’s test department in March to prepare for the airworthiness tests, the company said this week, adding that it aims to have all of its C919s tested over the next five years.

Developed by the state-owned COMAC, the C919 is the country’s first domestically produced passenger jet, intended to compete with single-aisle foreign models such as Boeing Co.’s 737 and Airbus SE’s A320, which dominate the global commercial aircraft market.

Obtaining an official certification from the aviation authorities remains one of the biggest hurdles to COMAC’s plan for a massive commercial launch of the C919 after its successful maiden flight in May. In December, a second C919 completed a test flight that greatly exceeded the speed and altitude of the jet’s maiden flight.

COMAC’s lack of qualified test pilots and test-flight technicians is one obstacle to getting the planes certified, according to Wang Yanan, Beijing-based editor-in-chief of the magazine Aerospace Knowledge.

Late last year, China reached agreements with the U.S. and the European Union to recognize each other’s aircraft product-safety standards. Although it is unclear whether Chinese aircraft can be directly exported to U.S. and Europe after approval from the Civil Aviation Administration of China, industry experts have said the agreement offers a good opportunity for C919 to expand its business globally.

COMAC has received of 785 orders for the C919 from 27 customers, though most are domestic airlines and lessors, according to the company.

COMAC has also developed a regional jet called the ARJ21, which obtained government certification in 2014 and has been used by several domestic airlines, such as Chengdu Airlines.