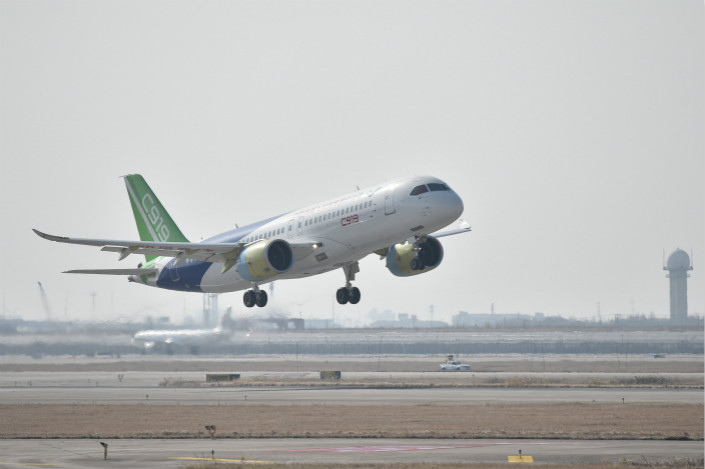 The second protoype of the C919 jetliner has notched a new speed record for the model at 291 mph. Above, the prototype takes off from Shanghai Pudong International Airport on Sunday during its first test flight. Photo: Visual China

The second China-built COMAC C919 passenger jet has completed its first test flight, surpassing its predecessor’s May flight in terms of maximum altitude and speed.

After taking off Sunday morning from Shanghai Pudong International Airport, the new C919 prototype, which bore the identification number 10102, successfully flew for over two hours before landing safely. While airborne, the jetliner reached a maximum altitude of 15,300 feet, over 50% higher than the 10,000 feet reached by the previous C919 model, the 10101, months earlier, according to state media reports.

The second C919 prototype also notched a new record in terms of speed for the model, hitting a maximum velocity of 253 knots (291 mph), up from the 170 knots achieved by the first prototype on May 5 but still far less than similar jetliners of its class.

Developed by the state-owned Commercial Aircraft Corp. of China Ltd. (COMAC), the C919 is the country’s first domestically built passenger jet, intended to rival foreign models like Boeing Co.’s 737 and Airbus SE’s 320, which dominate the global commercial aircraft market. Twenty-seven customers worldwide have ordered a total of 785 C919 planes, according to COMAC.

But while the latest successful test flight marks a step forward for China’s aviation industry, the C919 must still overcome a number of hurdles, according to Wang Yanan, Beijing-based editor-in-chief of China’s Aerospace Knowledge magazine.

One major issue is obtaining certification, since much of the technology used in the C919 is new, Wang said. This is also the first time China is carrying out a full airworthiness verification process — a battery of tests to determine whether an aircraft conforms to international standards, including bird-strike and lightning tests.

Additionally, Wang said, COMAC has only a few thousand technicians, out of whom only a few dozen are qualified test pilots and test-flight technicians. In comparison, the world’s largest civilian airlines usually have about 150,000 employees, Wang said.

COMAC has said it intends to put an additional four C919 planes through flight testing before a planned commercial launch in about 2020. The C919 is also currently being reviewed by the EU’s European Aviation Safety Agency.