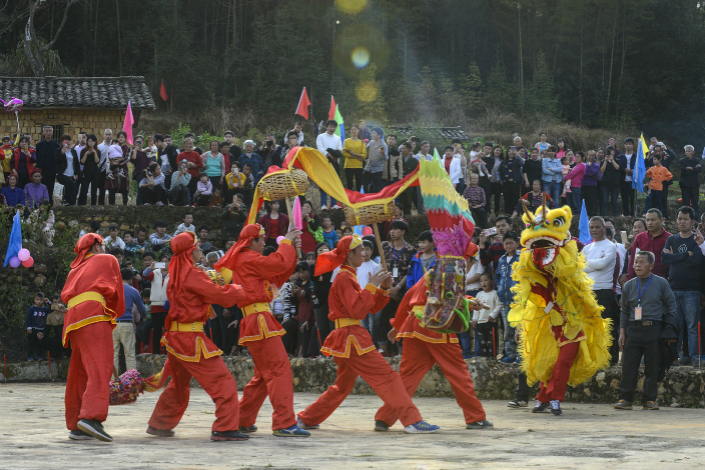 A Hakka folk-art performance takes place Monday in Ganzhou, Jiangxi province. The number of domestic trips during the Lunar New Year holiday increased by 12.1% this year to 386 million. Photo: VCG

(Beijing) — China’s 1.39 billion people celebrated the arrival of the Year of the Dog by splurging on eating, vacationing, shopping and going to the movies, although the rate of growth in spending slowed compared with the weeklong Chinese Lunar New Year festival in 2017, government data show.

Over the seven-day public holiday that ended on Wednesday, retail and catering businesses racked up a combined 926 billion yuan ($145.9 billion) in sales, a 10.2% jump compared with last year’s festival, which began on Jan. 27, 2017, the Ministry of Commerce said in a statement (link in Chinese) on its website on Thursday. But the growth rate slipped from the 11.4% pace reported by the ministry for the 2017 Lunar New Year break, and was also lower than the 11.2% increase seen in 2016.

Consumers snapped up jewelry themed on the dog, one of the 12 animal signs of the Chinese zodiac and the one associated with this new year, while other popular purchases included home appliances such as robot vacuum cleaners and water purifiers, the ministry said. The ministry noted a shift toward more-healthy eating, with best-selling food over the holiday period including organic grains, vegetables, fruit and nutritional supplements.

Food prices remained relatively stable over the holiday. Although the average prices of 30 major vegetables jumped by 3.7% from the previous week, gains in pork, beef and lamb prices were within 1%, and rice and flour prices were little changed, the ministry said.

The tourism industry also saw solid growth as rising incomes and better transportation links encouraged consumers to venture further from their hometowns. The number of domestic trips during the holiday period increased by 12.1% to 386 million, and tourism revenue jumped 12.6% to 475 billion yuan, according to the China National Tourism Administration (CNTA) (link in Chinese). Both numbers showed slower growth than in 2017, when the number of trips jumped 13.8% and revenue surged 15.9%, according to data released by the administration last year.

As car ownership in China has increased, making the country the world’s largest auto market, half of the trips made by Chinese tourists were in private cars, the CNTA said. The most-visited provinces were Guangdong, Sichuan and Hunan, the administration said. Beijing’s popularity as a holiday destination appears to be lagging, however. The city’s tourism authority said the capital saw more than 7.7 million visits during the weeklong vacation, up just 4.9% over last year's holiday, bringing in revenue of 7.3 billion yuan, an increase of 8.4%.

Increasing numbers of Chinese people are choosing to spend the Lunar New Year holiday overseas, and this year saw them travel to 68 countries and regions, according to the CNTA. The most popular destinations were still in Southeast Asia, although demand for holidays in faraway places like Argentina and Mexico grew, it said.

Box-office takings soared over the seven-day holiday, recovering from a slump last year that was attributed to the end of online ticketing subsidies and a lack of blockbuster movies. Revenue from movie-theater ticket sales jumped 67% to 5.7 billion yuan, according to Maoyuan.com, which tracks the industry.

Cinema screens were filled mainly with domestic productions. The top three hits were action and comedy adventure “Monster Hunt 2,” crime film “Detective Chinatown 2” and action movie “Operation Red Sea,” which all debuted on the first day of the Year of the Dog.