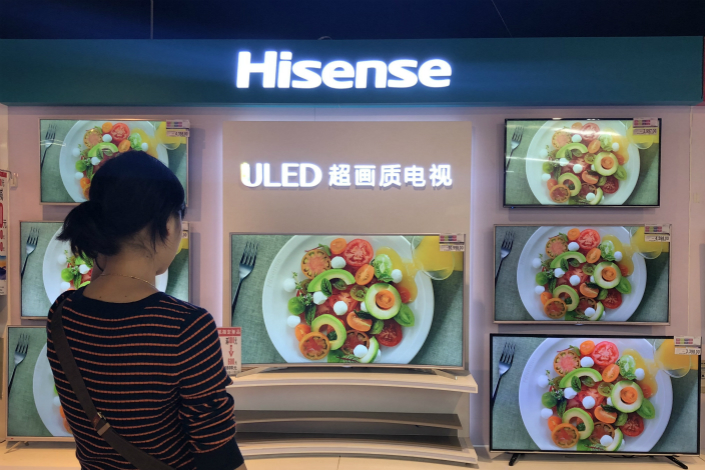 Hisense Group ULED televisions are displayed during the 19th China International Industry Fair in Shanghai on Nov. 11. A legal feud between Hisense and Sharp Corp. has cooled, with Sharp's dropping a lawsuit it filed in the U.S. against Hisense. Photo: IC

Sharp had dropped a U.S. federal lawsuit and an action filed with a U.S. trade body, the Japanese publication said, without citing sources or offering details about the lawsuit.

The Sharp-Hisense standoff originated from a deal back in 2015, when Hisense spent $23.7 million to purchase Sharp’s television factory in Mexico. The deal came with the rights to manufacture and sell televisions using the Sharp name for five years in the Americas except Brazil.

As Hisense continued its Sharp business in North America, the Japanese company filed a complaint with the Superior Court of the State of California in May, accusing its Chinese rival of selling “shoddily manufactured, deceptively advertised” televisions in the Americas under its name. In June, Caixin reported that Sharp dropped the lawsuit.

In late September, the U.S. International Trade Commission opened an investigation into Hisense after Sharp complained that the Chinese company was infringing on its patents. The commission said it would set a target date for completing the investigation within 45 days. However, no updates on the investigation have been published.

Sharp has taken other actions against Hisense television businesses. For example, Tai Jeng-wu, vice president of Foxconn and CEO of Sharp, “menacingly approached” Hisense and demanded the company return Sharp’s license, a Hisense executive previously told Caixin. The Japanese company also proceeded to take a series of “destructive measures” against the brand’s business in the U.S., such as cutting off supplies of LCD screens. It also sent letters demanding an end to the branding license, the executive said.

In response, Hisense in December filed a lawsuit against three Chinese subsidiaries of Sharp, arguing that nine Sharp television models produced and sold in China make use of a Hisense patent. Hisense demanded as much as 10 million yuan ($1.57 million) in compensation in the dispute.