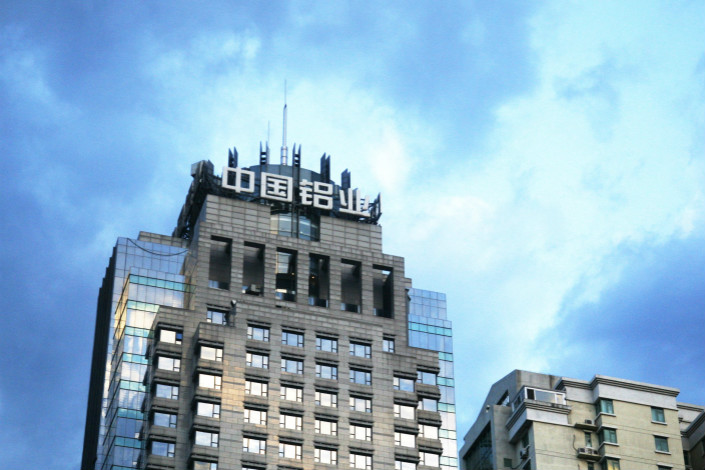 The Beijing headquarters of Aluminum Corp. of China Ltd. (Chalco) is seen in August 2012. An analyst told Caixin that the plunge in Chalco’s share price was due to it “catching up” with developments in the aluminum industry in the five months its shares were suspended. Photo: VCG

Shares in state-owned Aluminum Corp. of China Ltd. (Chalco) fell by the maximum 10% permitted by the Shanghai Stock Exchange for the third day in a row Wednesday.

The company’s shares had resumed trading Monday after being suspended on Sept. 12 for restructuring through the issuing of new shares and asset acquisitions.

Chalco, China’s largest primary aluminum producer, saw its share price close at 5.90 yuan (93 U.S. cents) Wednesday, compared to Tuesday’s closing price of 6.55 yuan. Before the suspension, the company’s shares were trading at 8.09 yuan per share, meaning the company’s market capitalization has shrunk by 28.6 billion yuan since it resumed trading.

An analyst told Caixin that the plunge in Chalco’s share price was due to it “catching up” with developments in the aluminum industry in the past five months, and was to be expected.

In the five months since Chalco suspended its shares, the benchmark spot price of Changjiang Nonferrous Metal A00 Aluminum fell from a high of 16,200 yuan per ton to 14,500 yuan per ton, due primarily to tighter-than-expected restrictions on aluminum production during China’s winter-heating period.

The details of Chalco’s restructuring plan gradually emerged while its shares were suspended.

As of Sept. 30, the company’s total liability with interest was close to 104.3 billion yuan, and its annual financial expenses exceeded 5 billion yuan.

In December, the company said it had introduced eight third-party investors, including China Life Insurance and China Cinda Asset Management, in order to increase the capital of four subsidiaries by 12.6 billion yuan, reducing its debt ratio.

Then in January, Chalco said it would buy back shares in the four subsidiaries for 12.7 billion yuan.

Chalco is one of China’s many state-owned enterprises facing a national drive to improve efficiency. There has previously been talk of a possible merger between Chalco and fellow state-owned metal giant Sinosteel Engineering and Technology Co. Ltd., aimed at consolidating state control in the metals sector.