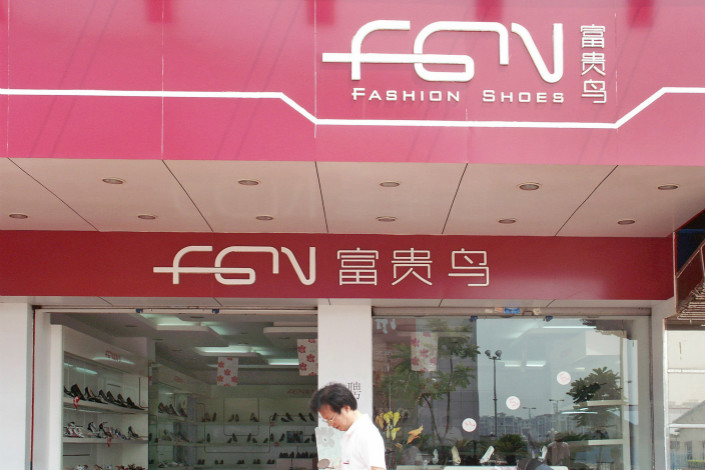 (Beijing) — The bond of a well-known Chinese shoemaker has plummeted nearly 90% in value over the past week as investors worry that the company won’t honor its buyback commitment.

The drop in the bond’s price underscores the growing concern about defaults as so many more Chinese corporate bonds mature this year in a much stricter regulatory environment for lending. The situation has fueled worries that indebted companies will have a much harder time refinancing their debts.

The price of the bond, called 14 Fuguiniao, went into a slide after it resumed trading on March 1. The bond had been suspended from trading for the previous 18 months due to delays in Fuguiniao’s publishing its 2016 interim report. There had also been rumors that the company had been illegally providing loan guarantees.

By the close of trading on Tuesday, the bond’s price had plummeted 91.8% to 8.56 yuan ($1.35), a fraction of its par value of 100 yuan. On Wednesday, the price rebounded 31% before the Shanghai Stock Exchange briefly halted trading on concerns about “abnormal fluctuation” in the price. The bond finished trading at a closing price of 12.19 yuan, down 88.3% from its March 1 opening of 103.8 yuan.

Fuguiniao is a shoe-and-clothing manufacturer founded in 1991 in China’s apparel manufacturing center of Shishi in the eastern province of Fujian. When the company issued the five-year, 800-million-yuan bond in 2015, it offered to buy back the bond from investors at its par value starting on April 23 this year.

However, bond custodian Guotai Junan Securities warned in a statement late last month that Fuguiniao has “not had a concrete arrangement for funds needed for the buyback and interest payment,” and that “there is significant uncertainty” about whether it can afford the buybacks.

Fuguiniao has liquidity problems as it violated rules to provide “immense amounts” of loan guarantees and lent over 4.2 billion yuan to others that it may not be able to recover, leaving the company with less than 100 million yuan in cash and current deposits. Guotai Junan said Fuguiniao’s land and factories in Shishi have already been taken over by the “local government,” without providing a reason or specifying whether the city or province had taken the action.

If it fails to pay for the buyback, Fuguiniao will become the second company to default in China’s corporate bond market this year. Bright Oceans Corp., based in the northeastern province of Heilongjiang, was unable in late January to honor its promise to repurchase debt worth 209 million yuan.

Fears about more defaults are growing as a number of other companies, including companies linked to privately owned CEFC China Energy Co. Ltd. and Protruly Vision Technology Group, have also shown signs of financial problems after the heads of the companies fell under government investigation or were found to have embezzled billions of yuan of the listed company’s funds.

Meanwhile, the amount of bonds maturing or available to be repurchased this year will hit 1.4 trillion yuan, double the amount in 2017, according to estimates by economists with Haitong Securities.

“Companies are facing rather big buyback pressure as the difference between the coupon rates of bonds issued since 2017 and those issued in 2015 and 2016 has become quite large,” the managing director of the fixed-income division of a securities company, who declined to be named, told Caixin.

“In addition, stricter financial regulation, which has battered ‘shadow banking’ activities and channeling business, has tightened liquidity in the market and will test the issuers’ ability to refinance,” he said.

The channeling business refers to operations in which nonbank financial institutions earn fees by acting as intermediaries to help banks circumvent regulatory requirements and funnel money into higher-risk loans and investment.