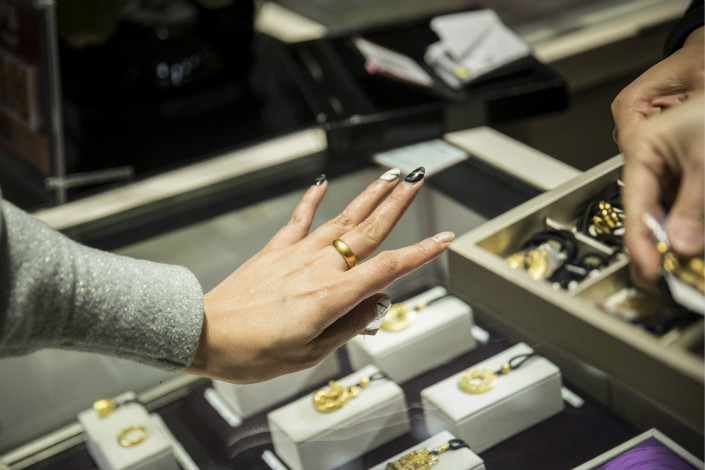 A shopper tries on jewelry in a Shanghai mall on Feb. 1. Photo: VCG

A major Chinese jewelry producer is spinning off its online sales channel, which it plans to list in Hong Kong.

Internet-based jewelry retailer CSMall Group Ltd., owned by China Silver Group Ltd., is expected to trade its shares on the Hong Kong Stock Exchange starting March 13, according to a statement it filed with the bourse.

The company, which runs an online platform as well as more than 100 shops in China, will use the funds it raises for optimizing both online and offline operations, such as upgrading technology, enhancing the interface of the online platform, and opening more shops in developed cities in China, according to the filing.

Launched in 2014, CSMall has already become the country’s largest jewelry retailer with online and offline operations, with a market share of 7.3% in 2016, according to consultancy Frost and Sullivan.

Disposable incomes have grown rapidly in China in recent years, alongside an expansion in the availability of online marketplaces. The jewelry market, whose sales grew 8.3% annually from 2012 to 2016, should continue to see steady growth, said analyst May Zhao from securities firm Zhongtai International.

CSMall’s parent, China Silver, has seen retail come to the fore of its operations, with revenue from jewelry retail sales contributing 58% of the total in the first half of 2017, up from only 1.8% in 2013.