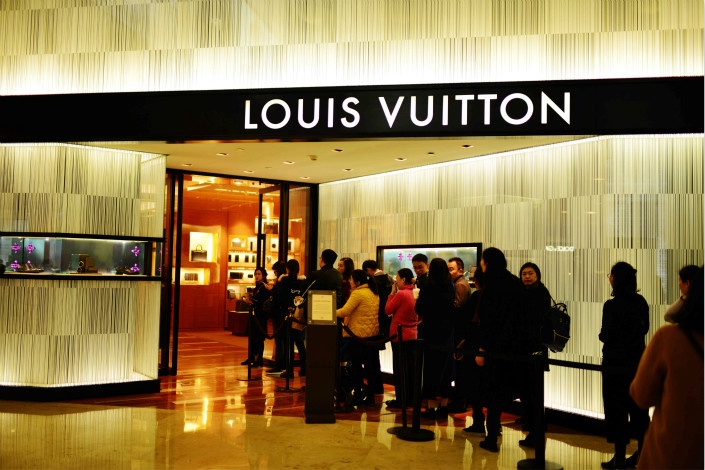 Customers wait in line at the Louis Vuitton store in the eastern city of Nanjing on Dec. 23. Last year, the fastest-growing luxury categories in China were the female-focused ones, such as cosmetics, womenswear and jewelry. Photo: Visual China

Chinese spending on personal luxury goods grew 20% in 2017, reversing three years of slowing consumption, according to a report by consultancy Bain & Co.

Reasons for the reversal include government policies to encourage domestic consumption and restrictions on “daigou” services — those in which a Chinese person living abroad buys items on someone else’s behalf and has them delivered to China.

New consumers, particularly millennials (aged 20-34) who are digitally savvy and highly knowledgeable about luxury, were major contributors to luxury market growth last year, according to the Bain report.

The fastest-growing categories were the female-focused ones, such as cosmetics, womenswear and jewelry.

Although many luxury brands have expanded into e-commerce in China, opening online stores and partnering with online marketplaces such as Alibaba Group Holding Ltd. and JD.com Inc., online luxury sales remain low, the report said.

Customers are also reluctant to purchase luxury items through third-party platforms. About 70% of respondents said that they purchase directly from a brand’s site rather than a store on Tencent Holdings Ltd.’s popular social networking app WeChat, luxury verticals or aggregators.

The preference is driven by factors such as exclusivity and after-sales service, Bain said.

“We expect the strong momentum of the domestic market to continue, fueled by millennials and strong complementarity between offline and online to drive traffic into stores. However growth is likely to slow down a bit this year, given the high growth rates achieved in 2017,” said Bruno Lannes, a partner in Bain’s Greater China office and author of the report.