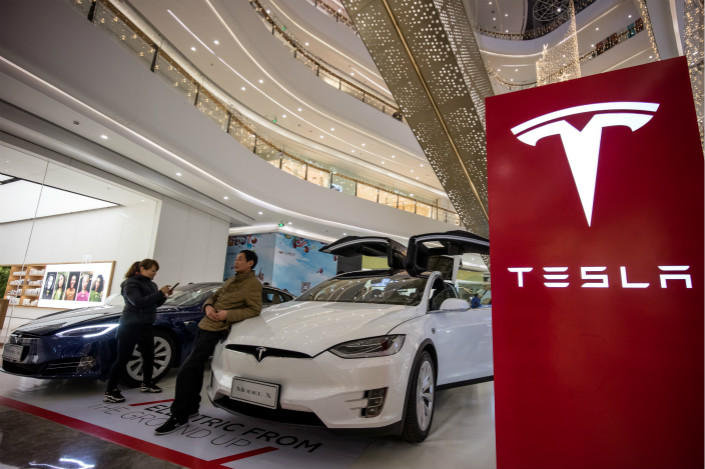 A Tesla electric car is displayed in a mall in Fuzhou, Fujian province on Feb. 2. Photo: VCG

Tesla Inc.’s CEO Elon Musk has criticized China’s high import tariffs and restrictions on foreign ownership of local car-making plants, as plans for his own production base in the world’s largest auto market stall.

Musk, whose separate SpaceX reusable rocket venture is widely followed in China, made the unusually blunt comments on his Twitter account, against a broader backdrop of rising trade tensions between the world’s two largest economies. Tesla is one of the world’s leading electric car-makers, and has big hopes for the China market.

“An American car going to China pays 25% import duty, but a Chinese car coming to the US only pays 2.5%, a tenfold difference,” Musk tweeted on Thursday. He made the remark as U.S. President Donald Trump signed orders for new tariffs to be imposed on imported steel and aluminum.

Musk also implicitly railed against China’s longstanding policy that limits foreign companies to no more than 50% ownership of any locally-based car manufacturing facility. Foreign companies often prefer majority stakes or outright ownership in such ventures, due to concerns over issues like strategic control and requirements for technology transfers.

“Do you think the U.S. & China should have equal & fair rules for cars?” Musk wrote in another post, “meaning, same import duties, ownership constraints & other factors.”

He made his comments as Tesla’s talks to build a production facility in Shanghai have stalled for reasons that have not been publicly disclosed.

Last November China said the current 50% limit for foreign ownership of car-making factories will be eased by June as long as the companies are producing new-energy cars located in a small number of free trade zones.

“Musk’s motive is to ask the Trump administration to put pressure on China to further open its car market, given its own lobbying power in the country has been very thin, said Wang Cun, an industry analyst with the China Automobile Dealer Association.

China has used relatively high import tariffs to protect its domestic auto industry, while ownership restrictions were aimed at forcing foreign automakers to transfer technology to their local partners.

However, such issues could gradually lose their sensitivity as China’s auto industry becomes more competitive and can survive without such state support, analysts said.

“As a member of the World Trade Organization, continuing to lower its tariff is a compulsory obligation China must obey,” said Shi Jianhua, vice president of the China Association of Automobile Manufacturers, a government-affiliated industry group. He added that lower import tariffs will have a very limited impact on China’s car industry.

China’s 1.2 million imported cars accounted for less than 5% of the total 28.88 million units sold in the country last year.