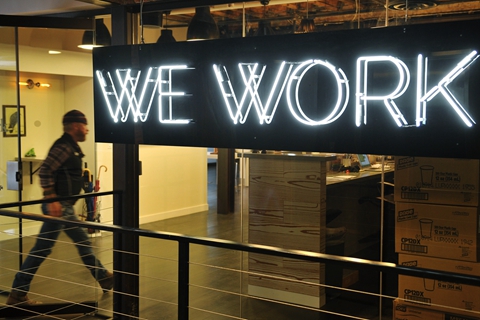 WeWork has been expanding its presence vigorously in the increasingly competitive China market. Photo:VCG

The partnership shows the New York City-based company’s ambition to accelerate its expansion in China, where it faces fierce competition from local rivals.

The newly launched initiative, applying to both current WeWork members and potential clients, will allow those with a credit score above 1,350 points with Zhima Credit to be eligible for a deposit reduction or a maximum deposit waiver of 100,000 yuan ($15,800) when they lease WeWork spaces, WeWork and Zhima Credit announced Monday.

The promotion, touted as the first of its kind to be available globally, is currently open only to corporate clients, but not individuals, WeWork said.

“A deposit for office rental accounts for up to 40% of a company’s costs at the preliminary stage, which is huge burden for startups,” Hu told Caixin.

Zhima Credit announced in November that it will invest 1 billion yuan to encourage merchants and service providers to eliminate any deposit from consumers. The company has launched programs to waive deposits for trustworthy users who rent bicycles, cars and short-term housing.

Zhima Credit expects the deposit deduction move will significantly increase WeWork’s new clients in China. There are over 3.5 million businesses on its platform with credit scores above 1,350 and willing to use leasing services, Zhima Credit estimated.

WeWork, founded in 2010, has grown to about 230 locations globally in 21 countries. Last year, WeWork scored a $500 million investment from SoftBank and Hony Capital to fund its expansion in China.

WeWork has been expanding its presence vigorously in the increasingly competitive market, with 13 locations in Beijing, Shanghai and Hong Kong. It plans to add new locations in eight more cities in China this year.

In September, WeWork filed a lawsuit in New York against Chinese shared-workspace company UrWork for trademark infringement and demanded UrWork halt a planned launch in the New York borough of Manhattan, the city’s financial center.

UrWork’s backers include Tianhong Asset Management Co., Ltd., a fund management firm affiliated with Ant Financial. UrWork’s founder, Mao Daqing, has acknowledged that the UrWork name is a play on WeWork, according to WeWork’s complaint.