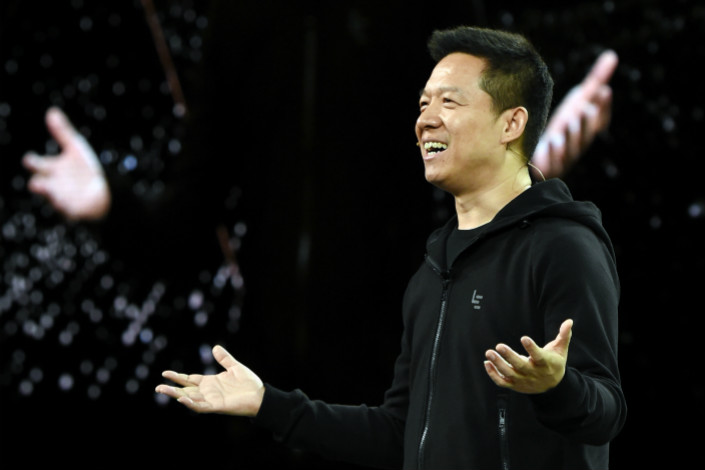 The founder of LeEco and Faraday Future, Jia Yueting, has defied the authorities' orders to return to China to help manage LeEco's debts. Photo: VCG

A company linked to Faraday Future, the U.S.-based electric car manufacturer backed by LeEco founder Jia Yueting, is bidding for an industrial plot of land in southern China for a car assembly plant, sources close to the matter told Caixin.

Caixin learned that Faraday Future is bidding on the plot through Ruichi Intelligent Automobile Co. Ltd., a company registered on Feb. 12 in the southern city of Guangzhou’s Nansha district, according to business registration documents.

The roughly 40-hectare (99-acre) plot up for auction is in an industrial park in the Nansha Bonded Port Area. The plot has a starting bid of 364 million yuan ($57.49 million). The government has required that the winning bidder establish an electric car assembly plant on the plot and begin production within 24 months.

A source close to the Nansha local government told Caixin that Ruichi Intelligent is likely to win the auction.

The official bidding process will be completed in early April. There’s still uncertainty over Ruichi Intelligent’s bid for the plot in part because Faraday Future’s founder Jia Yueting has been blacklisted as his name is on China’s national debtors’ database.

Faraday Future declined to comment on the auction or its relationship with Ruichi Intelligent.

Jia has defied the authorities’ orders to return to China from the U.S. to repay the mounting debt owed by various units of the tech conglomerate he founded — LeEco.

LeEco suffered a cash crunch in late 2016 that resulted in authorities freezing billions of yuan in assets. Jia has been in the U.S. since mid-2017 to focus on his electric car business.

Faraday Future has been pushing to get mass production of its flagship electric car model FF91 underway by the end of 2018. The company had planned to build a $1 billion electric car factory in Nevada in 2016. But it later abandoned the plan because of funding problems. Instead, Faraday Future leased and refurbished an old tire-making facility in Hanford, California, to serve as its factory for the FF91.

An auto industry source told Caixin that an assembly factory in Guangzhou would allow the company to import auto parts, assemble them in the bonded port area and then sell the cars in China as imports.

Lu Zhengyu, vice president of Faraday Future, said in late January that the company aims to localize the production and sales of electric cars both in the U.S. and China.

In addition to its founder’s debt troubles in China, Faraday Future has been under mounting pressure due to executive departures and growing questions about its finances.

In the lawsuit, Faraday Future said that Krause had challenged Jia for control of the company, contending that Faraday would be unable to secure new funding under Jia’s control.

Jia disclosed last month that Faraday has raised $1.5 billion, but did not disclose the identity of the investors.

A person close to Sunac China Holdings, which gave LeEco a 15 billion yuan cash infusion in 2017, said Jia raised the funds from Hong Kong investors and probably gave up his position as the controlling shareholder of Faraday Future to secure the financing.