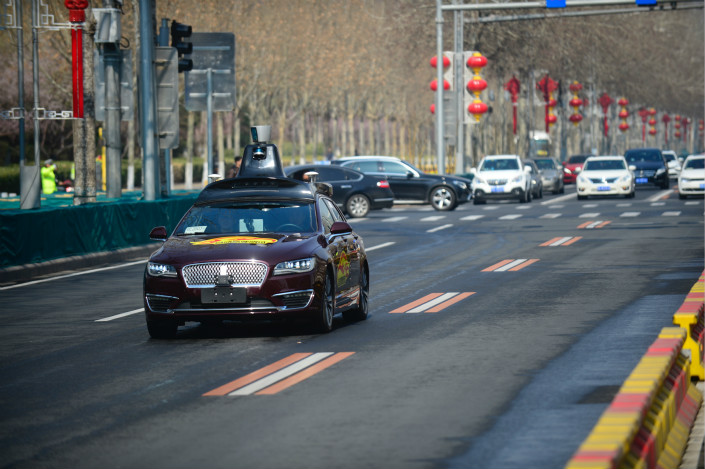 An autonomous vehicle undergoes a road test in Beijing on Thursday. Photo: IC

*Baidu Inc. still only company with a license to conduct such road tests in capital

The 33 designated roads are located mainly in less-populated areas in the suburban districts of Shunyi, Haidian and Yizhuang, Beijing’s Municipal Commission of Transport said Thursday (link in Chinese).

Warning signs will be placed on the 33 roads, and all autonomous cars will have to be emblazoned with striking designs that indicate that they are self-driving, according to the commission. The statement did not specify a date on which testing will be permitted to begin.

The announcement comes after Beijing issued rules in December to allow road tests of autonomous vehicles in the capital.

The rules say that a driver — who is required to undergo no less than 50 hours of training — must be in the car in order to take control in case of an emergency.

Companies applying for a license have to prove their vehicles have undergone over 5,000 kilometers of closed-environment testing and provide capability reviews, which must include the ability to obey traffic rules and handle emergencies, according to the commission.

Internet giant Baidu Inc.’s application has been approved by the commission, the company said in a statement — making it the only recipient of a license to conduct road tests in the capital.

Baidu, which has launched its signature autonomous-driving platform Apollo, has long been lobbying the Chinese government to relax rules on autonomous driving.

In July, a video showing CEO Robin Li testing an autonomous vehicle on Beijing’s Fifth Ring Road — with his hands off the wheel — raised eyebrows at Beijing’s transportation regulator, which later demanded an investigation.

Following in Beijing’s tracks, Shanghai announced in February that it will greenlight public road-testing of autonomous vehicles.