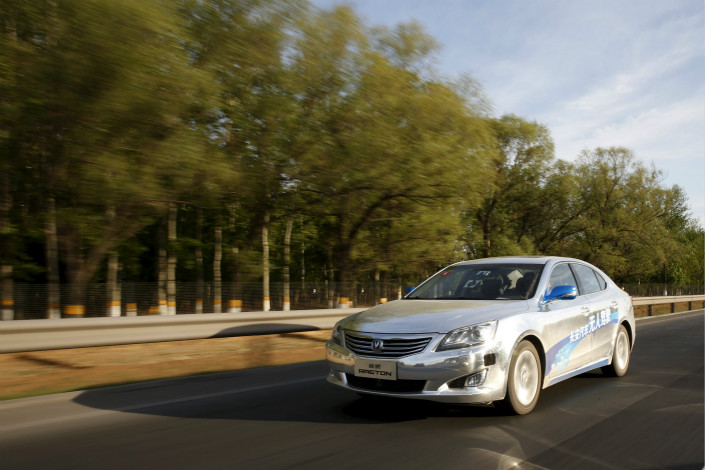 A testing zone for autonomous cars in the town of Yizhuang in suburban Beijing will be used exclusively for that purpose. Above, a modified Raeton sedan, a self-driving car from Changan Automobile (Group) Co. Ltd., is tested on a Beijing highway in April 2016. Photo: Visual China

A Beijing suburb will host the capital’s first testing zone for autonomous cars, a local transportation official revealed, weeks after the municipal government gave the green light to road tests of self-driving vehicles.

With the establishment of the testing zone in the town of Yizhuang, “the government will promote the development of autonomous driving technology by updating road facilities — such as signaling and marking — to enable ‘car and road synergy,’” an official from the Beijing Municipal Commission of Transport Commission told Beijing Communication Radio on Wednesday.

The official said that the zone will be used exclusively for tests of autonomous vehicles. It was not clear whether the Daxing district town’s existing roads will be used, or if new ones will be built specifically for this purpose.

Last month, the transport commission issued a rule that will allow Beijing to host road tests of autonomous vehicles. The cars will still need a driver and must have both an autonomous-driving mode and manual-driving mode to ensure that a person can take over the wheel “under necessary circumstances,” according to the rule.

In July, China’s State Council — the country’s cabinet — unveiled a national development plan, which said AI industries will be a major new economic growth engine and trigger expansion in related industries worth more than 1 trillion yuan ($154 billion) by 2020.

Beijing is also planning to build a 13.8-billion-yuan AI development park in the city’s west, the state-run Beijing News reported on Wednesday.

Upon completion, the AI park — which will be set up in Beijing’s suburban Mentougou district — will house around 400 enterprises and have an estimated annual output of 50 billion yuan, according to the report.

China’s ambition to be a world leader in the AI industry has attracted various players into this policy-driven area, including foreign internet companies. Last month, Google Inc. set up an AI center in Beijing, enlarging its diminished presence in one of the world’s largest internet markets.