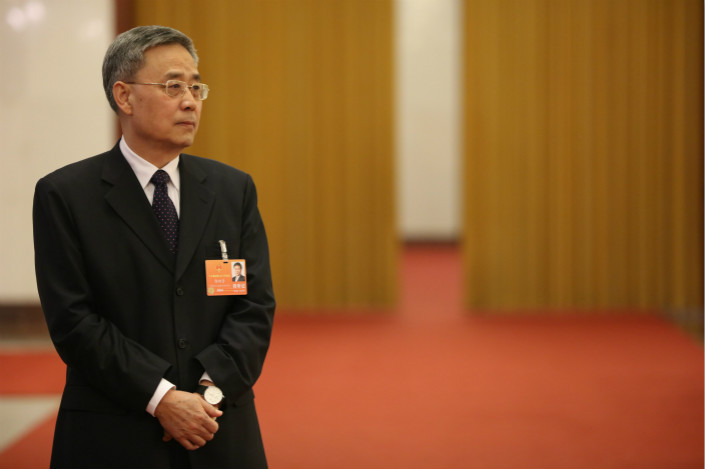 Guo Shuqing attends the second plenary session of the 13th National People's Congress at the Great Hall of the People in Beijing on March 9. Photo: VCG

(Beijing) — The head of China’s new banking and insurance regulator has been picked as the party chief of the central bank, as the government seeks to improve coordination between the two agencies in its campaign to rein in risk in the financial sector.

Guo Shuqing was named the party secretary of the monetary authority on Monday at a senior officials’ meeting of the People’s Bank of China (PBOC), Caixin has learned. He will be in charge of human resources, administration, party affairs and reform.

The appointment comes a week after he was named the first head of the China Banking and Insurance Regulatory Commission (CBIRC), a newly formed financial watchdog that combines the former banking and insurance regulators into a single regulatory agency.

Also part of the restructuring of the financial regulatory framework, the PBOC will take over the role of drafting key regulations and designing the basic rules for prudential oversight for the banking and insurance industries. Last week, it was announced that PBOC Deputy Governor Yi Gang will be the new head of the central bank, succeeding Zhou Xiaochuan, who retired after more than 15 years at the post.

China appoints a party secretary to every government agency to represent the interests and carry out policies of the ruling Communist Party. The party secretary often has equivalent or even greater power than the organization’s official head. The roles are often assumed by the same person. For example, Zhou was both the PBOC’s governor and its party chief.

Making Guo both the head of the CBIRC and the party secretary of the PBOC underscores the government’s intention to grease the gears of cooperation between the two agencies, a source close to the central bank who declined to be named told Caixin.

The arrangement will “beef up coordination (between the agencies) without a big personnel reshuffle,” the source said. “The effects are to be observed, but it is nonetheless a very innovative move.”

Friction and estrangement were pronounced between the central bank and the former banking watchdog. Problems included a reluctance to share data. The banking, insurance and securities regulatory bodies at one point also excluded the central bank from their own coordination mechanism — a practice that ended after the PBOC complained to higher-ranking officials at the State Council, China’s cabinet.

The agencies’ different policy objectives and regulations also left room for regulatory arbitrage and gave rise to “shadow banking” — financial activity outside the formal banking system that took place with little oversight or regulation, with institutions developing innovative products and services that exploited loopholes and gaps in supervision.

Born in August 1956 in Ulanqab, the Inner Mongolia autonomous region, Guo — who spent a year in the 1980s as a visiting scholar at Oxford University in England — has had an exceptional career among Chinese officials for its breadth of experience, which includes positions in local government, regulatory agencies and financial institutions.