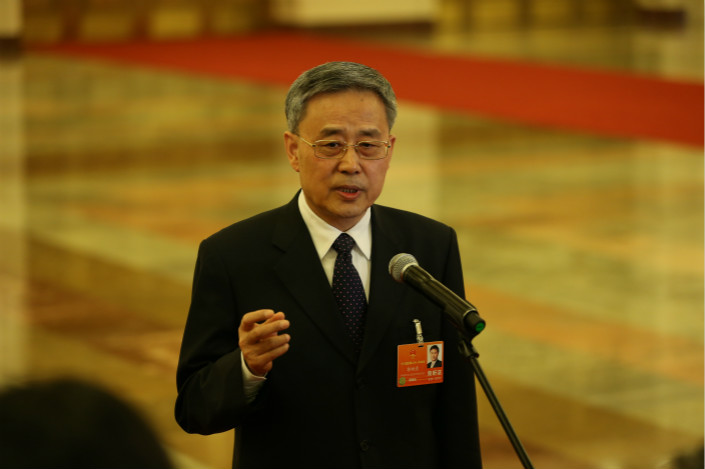 Guo Shuqing, China's top banking regulator and a prominent reform advocate, has been named chief of a new agency that will oversee the country’s banks and insurance companies, as the government steps up its campaign to defuse risks in the financial system.

His appointment as chairman of the China Banking and Insurance Regulatory Commission was announced at a meeting of senior officials of the new body which was formed through a merger of the banking and insurance watchdogs unveiled last week, sources told Caixin.

Guo, 61, who has headed the banking regulatory commission since February 2017, faces a formidable challenge in his new role — China’s banking sector, the biggest in the world, has more than 4,000 lenders with 252 trillion yuan ($39.8 trillion) in total assets, and is having a series of problems notably in its risky and opaque shadow-banking sector. The insurance industry, with more than 16.7 trillion yuan in assets, has been hit by a series of scandals involving companies including troubled Anbang Insurance Group, which has been taken over temporarily by regulatory officials.

Born in August 1956 in Ulanqab, the Inner Mongolia autonomous region, Guo’s career is exceptional among Chinese officials for its breadth of experience that includes local government, industry regulatory agencies and financial institutions.

After graduating from the philosophy department of Nankai University, in the northern port city of Tianjin, in 1982, Guo earned his master’s and doctoral degrees from the Institute of Marxism-Leninism-Mao Zedong Thought at the Chinese Academy of Social Sciences. He spent a year as a visiting scholar at Oxford University in England from July 1986 to August 1987.

Guo joined the State Planning Commission, then China’s top economic policymaking body and the forerunner of the National Development and Reform Commission, in 1988 after returning from Britain. Among those he worked with were Wang Qishan, now the country’s vice president and a former head of the Communist Party’s top anti-corruption watchdog; Zhou Xiaochuan, who has just retired after 15 years as central bank governor; and Lou Jiwei, a former finance minister.

He was also a colleague of Liu He, now one of China’s four vice premiers — both were part of a team researching into the country’s urbanization process for the drafting of some of the country’s medium- and long-term development plans.

In 1993, Guo moved to the State Commission for the Restructuring of the Economic System, where he spent five years. During his time there, he twice won China's Sun Yefang Economics Prize, which is named after a distinguished Chinese economist and is deemed the country’s most prestigious award in the field of economics.

In 1998, at the age of 41, Guo was promoted to deputy governor of the southwestern province of Guizhou, and in March 2001, he was transferred to the People’s Bank of China as a vice governor and the head of the State Administration of Foreign Exchange, the country’s foreign-exchange regulator.

Guo was sent to run China Construction Bank, one of the country’s big four state-owned commercial lenders, in 2005 after two of its former chairmen were brought down in corruption scandals. He led efforts to improve the bank’s management months ahead of its initial public offering on the Hong Kong Stock Exchange.

In October 2011, Guo was appointed chairman of the China Securities Regulatory Commission (CSRC), and in his 17 months at the helm he enacted a slew of reform measures, introducing more than 70 policies aimed at increasing market dynamism by reducing administrative interference.

He left the CSRC in 2013 to become governor and a deputy party chief of the coastal province of Shandong. During his tenure, he implemented a series of measures to accelerate industrial upgrading and streamline government administration in what is one of the country’s most economically important regions.

In February 2017, Guo was appointed chairman of the CBRC and started what has become known as a regulatory storm to tackle “various problems of disorder” in the industry, cracking down on shadow banking and stepping up scrutiny of banks’ wealth-management products. Last year, the banking regulator investigated 59,700 cases of wrongdoing involving 17.7 trillion yuan and imposed a record fine of 722 million yuan on China Guangfa Bank for fraud.

Guo is a member of the Communist Party's 19th Central Committee, a political body comprising the country’s top officials.